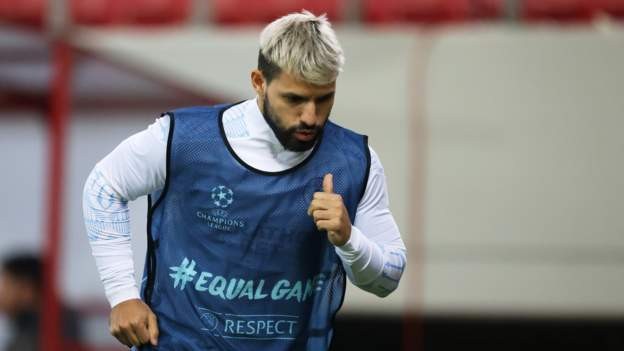 Sergio Aguero will miss Manchester City's Champions League game with Porto on Wednesday - but boss Pep Guardiola says the problem is not serious.

Aguero was absent for Saturday's 5-0 win over Burnley with a knee problem and has not returned to training.

The 32-year-old Argentina striker has only played four times this season.

"I am not concerned. He did not train. He had a little disturbance in his knee. It is nothing serious," said Guardiola.

City have already booked their place in the last 16 after winning their first four games. A draw in Portugal will seal top spot.

"We go there to get first place in the group stage. The important thing is done - to qualify - but we go to maintain our rhythm," Guardiola said.

"The Premier League is the main priority in general terms. We have 19 players in the first team fit and all of them travel. They are a really difficult opponent and we need the best players possible.

"Some players are going to play who didn't play the previous game.

"There are a lot of games but I don't want them to feel this is rotation. Every game is played with the best players for the circumstances for a specific game."

Porto have lost their three previous meetings with Manchester City by an aggregate score of 9-2.Porto are winless in their last five meetings with English teams in the Champions League (D1 L4), with their last such victory coming against Leicester City back in December 2016 (5-0).City have only lost one of their previous seven games against Portuguese opponents in European competition (W5 D1).Porto have won six of their last seven home games in the Champions League (L1), however the lone defeat in this run did come against another English opponent (1-4 v Liverpool in April 2019). Guardiola's side have already kept more clean sheets in the competition this season (three) than they did in nine games last season (two).Porto have scored with 25.8% of their shot attempts in the Champions League this season (8/31) - only Borussia Monchengladbach have a higher shot conversion rate.Sergio Oliveira has scored in each of his last three Champions League appearances for Porto; the longest streak by a Portuguese player for the club since Ze Carlos in November 1993, who netted in four in a row.