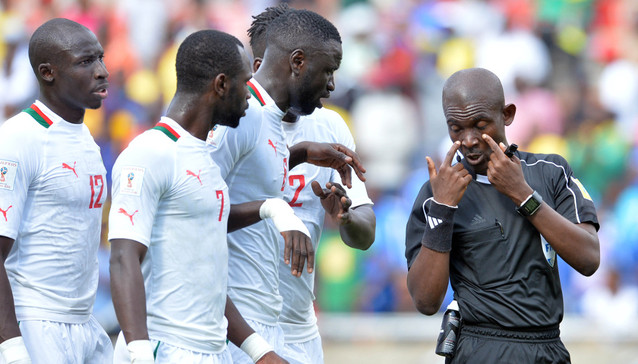 The recent life ban visited on Ghanaian elite FIFA referee. Joseph Lamptey has opened the floodgates of insults on the referee and other Ghanaian referees.

I am not particularly surprised, since it appears to me that this is just a matter of calling the dog a bad name to pave the way to hang it.

It is clear that among all the stakeholders in Ghana football, referees have become the most down-graded, insulted and are given all sorts of shabby treatment.

Admittedly, if the incident for which our referee has been so cruelly treated had happened in our own league competition, the referee would not have been set free. He would have suffered a sanction from the GFA as indeed has been happening to some of our local referees, especially in the area of awarding bad penalty kicks.

Decision making by referees in football matches are not always easy. Referees do make mistakes as in other human activities. In the 1986 World Cup and during the quarter final match between Argentina and England, we recorded the infamous ‘Hand of God’ foul by Maradona, the Argentina captain when he glaringly handled the ball in the 51st minute of the game.

Indeed, he used his hand to score a goal. The referee on the day, Ali Bin Nasser from Tunisia and his assistants allowed the goal to stand. Nothing happened to him or any of his assistants. Argentina progressed with that bad goal into the semi-final and eventually won the 1986 World Cup.

Again, in a world cup play-off qualifying match between France and Ireland in 2009, French Captain Thierry Henry, used his hand to clearly play the ball, out of which a goal, indeed the winning goal resulted. That was during the 117th minute of extra time.

That goal enabled the French to qualify for the subsequent World Cup tournament at the expense of Ireland. During the investigations into the affairs of the immediate FIFA President, Sepp Blatter, it came to light that Ireland was paid some financial compensation for that incident. Indeed, it was bribe to keep Ireland quiet. The referee was Martin Hansson from Sweden. The question is what happened to him. Nothing!.

Once again, in 2013, during a Confederation Cup match held in Brazil and during a semi-final match between the host nation, Brazil and Italy, Referee Ranshan Irmator awarded a goal to the Italian team after whistling for a penalty within the same breath.

Referee Ranshan Irmator whistled to award Italy the penalty, but later as play continued, Georgio Chiellini of Italy scored and referee Irmator who was seen pointing at the penalty spot changed his mind to give a goal. He admitted after the match that he had made a mistake. Nothing happened to him and the incident was officially described as a ‘technical error’.

FIFA has got seventeen Laws of the Game and these laws and guidelines are what govern the game of football. Referees all over the world study them and have to pass written and practical exams on them. FIFA has trained and planted instructors in every football jurisdiction. It is out of these that FIFA itself classifies and awards some referees as FIFA Referees.

The number of referees vary between two and 14 from country to country, depending upon their strength of football. Ghana like many other countries have almost always had seven male referees and assistant referees.

Modernity and technology have combined to bring football matches to the homes of almost every football lover. And this has given us the chance to observe and watch the performance of referees the world over.

In Ghana, the European league matches are the toast of all soccer loving fans. We, therefore, get the opportunity to watch the performance of referees from other countries.

Granted that, most of those leagues are more competitive and financially supported, the performance of the match officials who handle them are a notch higher than those who handle the developing leagues.

It does appear to me that the post Blatter FIFA officials are so keen in establishing a difference that they may end up over stretching themselves. Unless there are known extra information available to the world football governing body, it does appear that their decision on this gentle, hardworking and affable Ghanaian referee is rather too harsh.

Again, with my little knowledge in the laws of FIFA, I find it difficult to appreciate the call for a REPLAY of the South Africa/Senegalese qualifying match. Is FIFA telling us that in that match, the referee’s decisions could not be final? I have made copious references to incidents in three different matches played in the past.

Those matches appear to be played on higher or similar levels with what appears to be more serious mistakes by the match referees so cited.

I really wonder the kind of precedent that our FIFA wants to set by their decision on the Ghanaian referee.

What is more serious and severe than a player jumping to head the ball and realising that he was at a height disadvantage and decided to increase his length by stretching his hand to parry the ball over the stretched hands of the goalkeeper?

Indeed, if we are to follow this decision and apply it to our Ghanaian league, we can be assured that one league season can take two years or seasons to end; especially in the midst of the many football litigants around. One of the nice ingredients in football is the fine dictatorship given freely to referees. Already, some boardroom decisions appear to be interfering in the smooth running of our football.

While at this, I am reminded that the Secretary-General of FIFA hails from Senegal.

Without trying to impute any bad motive to the gentle Madam Fatima Samara Samba, it appears that the decision was taken to pacify Senegal, the losers of last year’s November match. I am only a retired football referee and I don’t want to be invited to Zurich.

The game of football has travelled a long way to reach its present enjoyment and entertaining value. Nothing should be done to undermine the authority and powers of the referee. It is refreshing that we have been given the opportunity to observe the performance of various other referees during the ongoing WAFU Tournament.

The competence or otherwise of Ghanaian referees can be observed. A critical examination of the on-going WAFU Cup tournament should serve as theatre for judgment.