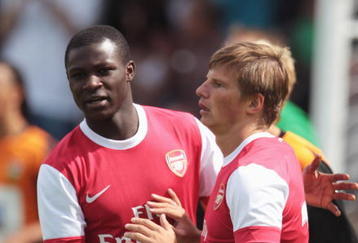 Ghana. Sheez. How unlucky can you get? After reaching the quarterfinals of the World Cup without crocked Chelsea star Michael Essien and with Sulley Muntari causing havoc in the camp, some irksome Uruguayan uses a hand to prevent the Black Stars from claiming their rightful place as Africaâ€™s first global semifinalists.

Ah, how Africa wept that fateful night at Soccer City on July 2 when Luis Suarez produced footballâ€™s second Hand of God, enabling his side to progress on penalties. What might have been, eh?

But thatâ€™s history now. An 18-year-old Emmanuel Yaw Frimpong represents the future, but he too has been hit by the curse of the Black Stars.

With a name that sounds curiously like a video game for Xbox addicts if you say it quickly, Frimpong is the new Ghanaian on the blockâ€”on Arsenalâ€™s north London block, that is.

Arsene Wenger swooped for the lad from Accra when he was just 11. Just as he did with Cesc Fabregas, Mathieu Flamini, and Nicolas Anelka, the shrewd Frenchman was in and talking to the parents before the locals realised what they had on their hands. He signed at the turn of the millennium and has rarely looked back.

Frimpong has been talked about for some time by Arsenal aficionados, but few outside the Gooner blogs have heard of the midfielder who started all three of Arsenalâ€™s preseason friendlies next to the young English phenomenon Jack Wilshere, also 18.

The official Arsenal website suggests the lad is â€œbuilt like a welterweight boxer,â€ and his prowess in the tackle makes him one of those â€œMakeleleâ€ midfielders who can win the ball as well as working magic in possession.

Frimpong might have been promoted even more quickly but for a hamstring injury which disrupted his progress last season. He laments, "Last season was difficult, it was the hamstring injury that just wouldnâ€™t go away. It was quite frustrating, especially as I went into this season hoping to make progress in the reserves and beyond."

But for a torn cruciate suffered in training with the reserves in Dublin this month, heâ€™d be the one wearing the No. 41 shirt this season. As Wenger said before injury struck, "Itâ€™s great to have two young players from our youth system playing so well in preseason. We are all happy. Frimpong is a bit less of a dribbler than Wilshere, but he's a fighter and a winner."

While Mario Balotelli, Inter Milanâ€™s young Ghanaian who has just moved to Manchester City, shrugs off his heritage to play for Italy, and Jerome Boateng chooses to play for Germany, Frimpong has resisted the lure of England. And he did if before the Three Lionsâ€™ appalling World Cup performance cast a pall over the game in the land where football was invented.

Frimpong played for Englandâ€™s Under 16 and Under 18s, but insisted in February, "I have always said that, no matter what, I will always play for Ghana because at the end of the day, from what I believe, I am a Ghanaian.

"England has done a lot for me and my family but at the end of the day I can't see myself playing for England because I am not Englishâ€”I am from Ghana."

Wenger is mystified by Fabio Capelloâ€™s failure to test Frimpongâ€™s unexpected pledge of allegiance. Never one to worry about nationality, Wenger growls, "Here you have a boy who can choose between England and Ghana. So if I was in your place, I would have no hesitation and invite him to play very quickly for England."

But Capelloâ€™s silence is deafening. Now something of a lame duck England coach after their World Cup farce, the Italian has missed the boat once more. Next time Ghana appear on the international stage, expect a rehabilitated Frimpong to feature in the Essien role. Prominently.