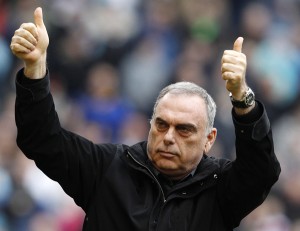 While alone with my thoughts this week, I played the scene over in my head; one by one, each of the five candidates, shortlisted for the Black Stars coaching job, step up to present their credentials to replace Kwesi Appiah, who was â€œfiredâ€™ about a month ago.

However, without a laid down criteria by the three man committee set up to find this new coach, itâ€™s been one guessing game after another.

That game has been made easier, with a narrowing down of over thirty applicants to just five. Word out there is that, the committee might go with the cheapest hire amongst the five. However, if thereâ€™s anything about the committee worth noting, itâ€™s their unpredictability.

I mean, who really saw the cutting of supposed favourite, Milovan Rajevac? I didnâ€™t, hence my open mind in predicting who steps in Kwesi Appiahâ€™s shoes. Whoâ€™s first up? That would be â€¦â€¦.

If disposition won matches, Grant would be losing for fun. Think of the complete opposite of Atletico Madrid coach, Diego Simeone, thatâ€™s how Grant looks; docile and uninterested on the touchline.

If you are looking for a pumped up personality, then forget Grant. However, if you are looking at a pragmatic coach who would cook a meal with his limited beans, Grant, the 59 year old, from Israel is your man.

His fear for losing games informs his philosophy and how he sets up his teams. Grant had success with his native Maccabi Haifa, where he won domestic titles before coaching the Israeli national team. His pragmatic tactics saw Israel go through the whole 2006 World Cup qualifying campaign without a loss.

Thatâ€™s what you will get from Grant, who also coached West Ham, Portsmouth and guided Chelsea to the 2008 UEFA Champions League final.

Grant, who has just signed with Thai side, BEC Tero Sasana, as technical director, is really another Milovan Rajevac, only with a higher pedigree.

Talking of pedigrees, Patrick Kluivert, the former Barcelona and Dutch striker would be riding on pedigree to secure the Black Stars top job.

Kluivert who is 38 years hasnâ€™t really coached in a senior role and has just had spells with FC Twente's reserves, AZ Alkmaar and NEC Nijmegen in an assistantâ€™s role.

Assisting seems to be his thing as he also had a brief spell under the late Tito Vilanova at Barcelona.

His biggest job yet is assisting then Dutch coach, Louis van Gaal at the 2014 World Cup in Brazil. Thus, itâ€™s a little difficult assessing his technical capacity and his appointment, if indeed confirmed, would have been just based on his reputation.

It will be a big risk as he is unproven in a head coach capacity. Thankfully, there are no women on the appointing team to be swayed by his boyish good looks.

When you are remembered more for your celebratory antics than your coaching tactics, then itâ€™s a cause for worry. 60 year old former Italian international, Marco Tardelli, another shortlisted candidate, built a solid reputation as a defensive midfielder and is world famous for his celebration when he scored against then West Germany in the 1982 World Cup final.

After short spells with Italian sides Bari and Inter Milan, as well as the Egyptian national team, his most stable job was assisting Giovanni Trapattoni, Republic of Ireland coach, till September 2013.

His short spells as head coach with teams indicate a nomad who barely stays in his job; the Egypt and Inter Milan stints are proof. His management style, mimics his playing style; solid organization.

Now, that is one attribute the present Black Stars could use.

60 year old Swiss coach Michel Pontâ€™s credentials wonâ€™t grab you. Serving as assistant national team coach for 13 years is his claim to fame back in Switzerland. He was at post until he left office together with his boss, Ottmar Hitzfeld, after the World Cup in Brazil. He also works as a consultant for Swiss Television and really thereâ€™s not much to judge him by in a full head coach role. Out of the chosen five, he may the longest shot.

Then there is the 50 year old Spaniard, Juan Ignacio Martinez, who until recently was coach of Spanish side, Real Valladolid. He lost his job after Valladolid were relegated last season. Apart from, Valladolid, he also coached Levante in the top flight and famously guided the team to their spectacular opening of the 2011/2012 season, where Levante went unbeaten in the first 9 games. He did that with limited resources by pumping up the dressing room into a never say die attitude on the pitch.

In the short term, he does pretty well before plunging. If the Black Stars are in need of a quick fix, then the man simply known as JIM could sneak in on the job. The last two look like journey men, but so were a couple of the coaches who â€œsucceededâ€ with the Black Stars in the past.

Though one of Grant, Kluivert or Tardelli look odds on favourite, a one on one interview, to be conducted from October 17-18 to assess their technical, psychological skills, as well as emotional intelligence should trump all other considerations, especially financial, well, thatâ€™s what I think, and I know, I am not alone in that thought.

(Culled from the 90 Minutes)