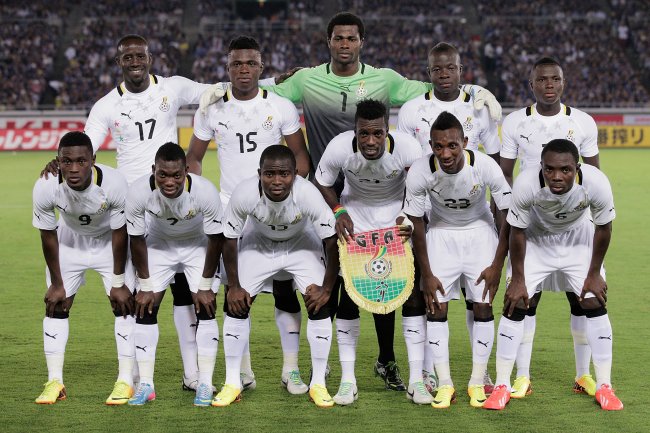 November 19, Tamale Stadium, Ghana. The shrill sound of the refereeâ€™s whistle, tapered off into the sky, and with it, Togoâ€™s qualification too. Ghanaâ€™s Black Stars had just beaten the Hawks 3-1 to secure a spot at next yearâ€™s Africa Cup of Nations (AFCON) to be held in Equatorial Guinea.

Rooted on solid ground, the Hawks failed to fly; the Stars didnâ€™t shine either, though the barest of illuminations looked adequate for the players. The spring in their steps, as they jigged away on the tracks, accentuated that feeling.

However, thousands of miles in other cities; Accra, Ho, Kumasi and even across borders, Black Starsâ€™ fans, werenâ€™t exactly feeding off similar adrenaline.

You would think that, five odd months should have been enough, to heal the wound inflicted by the Starsâ€™ disgraceful outing at the 2014 World Cup in Brazil. But Like a jilted lover, that deep wound, festers and a measly win over featherless Togo, was just bandage.

Ahead of the game, the apathy was palpable on the streets, offices and on social media. Some fans even wanted the Stars to lose. Unfortunate you would say, but fans have interesting ways of communicating their displeasure.

The loud fan hostility however belied a silent desire; to have their Black Stars back; one that elicits pride, passion and goodwill. How do you bring the Black Stars back the? Thatâ€™s the question I posed on social media and here are the sum views.

In recent years, selection and call ups into the Stars team, it seems, hasnâ€™t been based on any defined or clear cut formula. Selection has been vested in emotions and knee jerk reactions rather than sound criteria.

Take for example the farce that has become of the goalkeeping situation. This year alone, 4 different goalkeepers have kept goal in 9 competitive matches for the Black Stars. Adam Kwarasey, the most active over the course of the year was chopped after the first World Cup game versus the USA for unexplained reasons.

Fatau Dauda, who had been inactive, was brought back and chopped after the first 2015 AFCON qualifier versus Uganda after a costly error. Steven Adams replaced Dauda and kept three straight games only to be chopped after his shenanigans versus Guinea.

Razak Brimah came in and made an error versus Uganda and the chorus for his replacement went up a decibel.

The goalkeeping situation mirrors the general inconsistency in team selection. The Stars technical team, need to realize that consistency and a minimum amount of mistakes, must be allowed to build confidence, chemistry and cohesion within the team.

Itâ€™s the only way the team can gel tactically and socially to form a winning team that can attract the fans back. Â Do I see you reaching for the like button?

Bring back the U-20 boys

Once upon a time, there was a particular template that provided a solid base for the Black Stars development over the years. The core of the national U-20 team, the Black Satellites, was promoted after major tournaments to augment the Black Stars.

That template witnessed the biggest success in 2006 when the Black Stars debuted at the senior World Cup with the spine of the team made up of members of the Satellites team that won silver at the 2001 World Youth Championship (WYC) in Argentina.

Fast forward to 2009, the Satellites went one better by winning the 2009 WYC in Egypt. By fate or accident, a number of senior players were absent through injury or suspension going to the 2010 AFCON in Angola.

These boys contributed to Ghana winning silver at the 2010 AFCON and a quarter final placing at the 2010 World Cup.Â  What these U-20 boys brought to the plate were ingredients like industry, passion, pride and a hunger to succeed.

It is thus, a no brainer that, another group of these U-20 boys, the class of 2013, who won bronze in Turkey, be promoted to inject the above mentioned values and competition into the team.

One member of the 2013 class, Baba Rahman, has already justified that call with commendable displays at left back in the just ended 2015 AFCON qualifiers. Thatâ€™s the crusade, join and tweet with the hashtag #bringbackourblackstars.

Bring back the bond

Watching the Black Stars these days is quiet a drag. You see an ill motivated squad, desperately digging in to inspire themselves and reconnect with want away fans; to restore a broken bond. Make no mistake, the importance of a united nation, in one spirit, behind a team, can do magic.

Zambiaâ€™s 2012 AFCON victory is clear testament. The hurt and betrayal after holding the nation to ransom over unpaid $100,000 appearance fees in Brazil sowed a seed of mistrust and alienation.

To restore the bond with fans, the defensive posture by the players and management members would have to be done away with, replaced with an honest admission of the Brazil mistake and an honest apology rendered.

The fans are discerning enough to spot sincere remorse. Until that is done, fan apathy may continue and no amount of financial motivation can restore the bond and bring back the swashbuckling performances associated with the team.

That loved Black Stars, were last seen on October 15, 2013. So, continue the crusade wherever you are, because thatâ€™s WhatsApp!