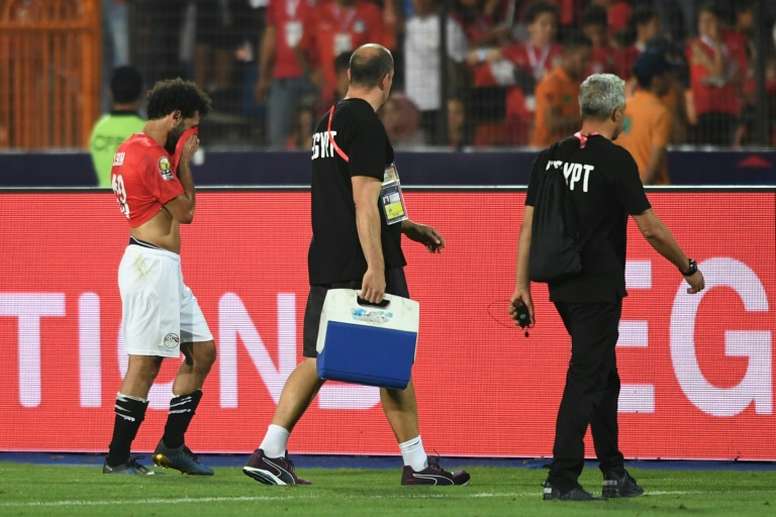 After his tale of redemption with Liverpool this season, Mohamed Salah was instead left in disbelief once more as Egypt crashed out of their own Africa Cup of Nations, an exit that triggered an immediate clearout within the country's football association.

While Salah helped lead his club to a sixth European Cup triumph in June, a year on from an injury forcing him out of the final, he was powerless to stop the Pharaohs suffering humiliation on the international stage for the second time in 12 months.

The forward arrived here full of promise -- his mood and fitness in sharp contrast to this time last June when his shoulder was injured as he was wrestled to the ground by Real Madrid's Sergio Ramos in the 3-1 loss in the 2018 Champions League final in Kiev.

He scored twice in four matches in Cairo, both goals struck with unerring precision, but rarely looked at his peaksurrounded by an Egyptian supporting cast far more limited than he is accustomed to at club level.

But Salah also, uncharacteristically, made headlines off the pitch after offering a degree of support for disgraced team-mate Amr Warda, who was banished from the squad over sexual harassment allegations only to later be recalled -- with Salah at the forefront of appeals for his reinstatement.

One of the most popular Twitter hashtags in the wake of Salah and others defending the midfielder was "National team of sexual harassers".

Salah faced a backlash from many users after saying Warda deserved a "second chance" and that "shunning is not the answer".

Many of Salah's fans noted his hypocritical line of argument. He has made a point of speaking up for women in the Muslim world, and in an April interview with Time magazine he vehemently defended their rights in the region.

Shouldering the weight of expectation of nearly 100 million Egyptians, hoping for afourth title in five editions as hosts, Salah found himself a capable ally in Mahmoud 'Trezeguet' Hassan, the team's standout performer in the group stage.

But he too wilted as the pressure intensified once the tournament moved into the knockout phase, spurning Egypt's best chance in a bitter defeat that provoked widespread dismay throughout the football-mad nation.

'No tactics or strategy' -

"I'm really sad. Nobody expected we would go out at this stage. We thought for sure our team would reach the final," said Mohamed Alaa, a 17-year-old fan from Cairo.

Amr Kamel, 23, said he was "disgusted" by the team's abject failure.

"We expected better than that, that we would win, especially given the competition is being played in our country. We are really disgusted."

The sense of shame prompted Egyptian FA president Hani Abou Rida to sack coach Javier Aguirre and announce his own resignation out of "moral obligation" just hours after the defeat, paving the way for a vast shake-up within the organisation.

Aguirre came in for criticism for his management of the side during the Cup of Nations, with Egypt legend Wael Gomaa accusing the Mexican of having "no tactics or strategy".

Following Saturday's defeat, Aguirre said he alone took the blame for the host nation's disastrous campaign, with his departure coming after less than a year in the job.

Abou Rida also called on board members to quit after "disappointing Egypt's supporters" and bringing an end to his three-year reign marked by controversy, including a 2018 World Cup fiasco that saw the Pharaohs fail to get out of the group stage after losing all of their matches.

The location of the team's training base in Grozny, the capital of Muslim-majority Chechnya, spurred widespread criticism -- especially from human rights groups -- over concerns of abuses by Chechen President Ramzan Kadyrov, supported by Russia's President Vladimir Putin.