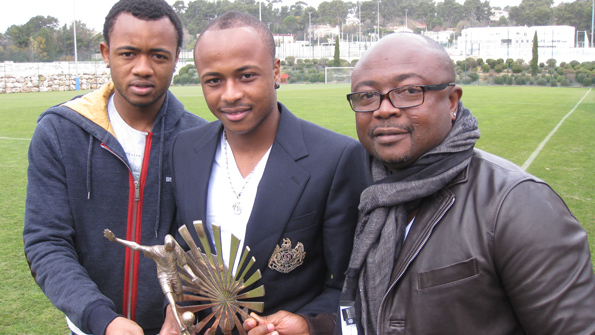 Andre "Dede" Ayew's grandfather did not play football but the odds are he might have been pretty handy had he done so.

For three of his sons all played internationally for Ghana, including Abedi "Pele" Ayew, a man widely recognised as one of the greats of African football.

Amazingly, Abedi himself has repeated the feat, with his three sons - Rahim, Dede and the youngest Jordan - all having represented the Black Stars as well.

In fact, should Jordan, a club colleague of Dede's at Marseille, contest next month's Africa Cup of Nations finals, all three of Abedi's sons will have played at the tournament.

It's an impressive achievement to say the least - and history repeated itself once more on Friday when Dede won the BBC African Footballer of the Year award, 20 years after his dad won the inaugural accolade.

Back in 1991, the African influence on European football was a very different affair - and hard though it may be to believe now, there were just two African internationals playing in England's top-flight. (Or at least, I think it was only two - any advances on that tally?)

Among those leading the charge for the continent was Abedi Pele, a winger who had already hit the headlines back home after winning the 1982 Nations Cup as a 17-year-old.

Before joining Italians Torino for a successful spell, Abedi was a lynchpin of the Marseille side that won the club's sole European Cup (even if the 1993 triumph will forever be tainted in controversy given the match-fixing affair that followed).

The captain of that team was one Didier Deschamps, who now finds himself not only managing Abedi's son at Marseille - but also incredibly grateful for the 22-year-old's recent exploits.

Earlier this month, Marseille were 2-1 down at Borussia Dortmund and exiting the Champions League until the Black Star thumped home a header with five minutes to go - sparking a famous fightback that saw the French side win 3-2 and squeeze into the knock-out stages.

It was Dede's 12th goal in 22 games this season, confirming the winger's dramatic improvement as a goalscorer - a facet of his game that used to be weak.

An excellent header of the ball, despite standing just 5ft 9in, Ayew has fine ball control and dribbling skills but arguably his greatest asset is his seemingly insatiable appetite for hard work - the legacy of paternal advice.

"Of all my dad's advice, 'patience' and 'hard work' are the words that really stayed," Dede said on receiving his award.

"My dad was always telling me to be patient and to work hard and that's what I tried to do - to calm my nerves when things were difficult. And those are the words that led me to be who I am today, even though there's a lot more to prove."

Dede's difficult times came in the early years of his career when a sceptical public was convinced that he was trading off his dad's legend - as they were when he appeared as an 18-year-old at the 2008 Nations Cup.

And while many fans doubted his quality, Dede himself was well aware of how difficult it would be to make it as a footballer in his own right given his father's standing.

"It's difficult to say that being the son of a legend is a help - perhaps it's the other way round - but it is something that pushes you on," he says. "People always try to compare but luckily for me, my dad has seen a lot of things in his life and can advise very well.

"It's good for me to get all that advice and become a better player, because I can learn from him, but there was also a difficult part - which I think is now behind me - when people were expecting that I would do like him or be better than him, which was complicated.

"Today, bit by bit, I am moving away from that and proving that I can fight to be the best - that's my big honour."

Dede did actually start out under his dad at Ghanaian club FC Nania, which Abedi runs, before the latter's connections with Marseille certainly worked for his son as the then 15-year-old joined the club in 2005.

He made his debut two years later but was then loaned out for two seasons - first to Lorient and then to second-division side Arles-Avignon, the team he was playing for when he started to grace the international stage with real purpose.

In October 2009, Dede was an inspirational captain as Ghana's Black Satellites became the first African team to win Fifa's Under-20 World Cup - three months later, he then shone for the Black Stars themselves as they reached the 2010 Nations Cup final.

Later in the year, the youngster took to the field in the World Cup - starting every game until suspension ruled him out of the Uruguay clash, but doing enough in his four games to be nominated for the Best Young Player shortlist.

When the BBC first interviewed Dede in 2005, the 15-year-old outlined his simple desire to follow in his father's sizeable footballing footsteps - but playing in the World Cup was something Abedi never achieved.

And Dede is keen to ensure that he achieves even more.

"I want to win a World Cup," he says plainly, when asked to name his greatest ambition. "Because an African team that wins the World Cup will not just be winning it for their country but for the whole continent."

Whether that comes to pass or not, Dede - who has been constantly linked with Arsenal over the years but who renewed his Marseille contract on Sunday - is still young enough and progressing so well that he may have many other medals by the time he hangs up his boots.

And should all go to plan for him, perhaps people might catch sight of Abedi Pele in future and say: "Look, there's Dede Ayew's dad."