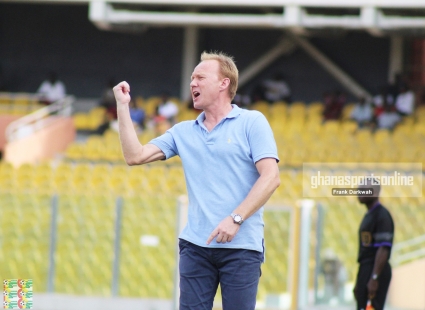 Coaches are hired to be fired, so goes the age-long adage, something I have always kicked against but that is the unchangeable cliché since the genesis of football. And so must they be lauded and hailed if they make remarkable achievements.

Following his appointment, Frank Nuttal took a few steps back, observed the team under assistant coach Henry Willington before assuming full control. He played his first game against Medeama SC in Accra, a game the Phobians drew but I was convinced he was the right manager the Rainbow Boys needed - a teacher.

Following the embarrassing departure of Japanese trainer Kenichi Yatsuhashi, the Phobian family cried for a better replacement and a coach who could reposition the fitness levels of the players to unwrap the never say die spirit in the team again.

In came Sergio Traguil, arguably the worse foreign coach who has even worked with the Accra club, swivelling the club from good to bad and from bad to worse.

So the arrival of Frank Nuttal was greeted with massive expectations and as intelligent as he was, he calmly entered the Phobian ship and started his transformational journey.

Despite the club's inability to win the league this season, (mathematically, Hearts can still win but for me, it's over for them) the club has seen a massive rise in the performance of the players, an indication that their fitness levels are apt and their technical development, spot on.

Almost all players who were nearly transfered from the club last seasonhave suddenly become heroes under Frank Nuttal. Yes, it's his job to transform the team as the coach but it's never out of place to recognise his efforts and praise him for his good works.

Do you remember how some of us stood against the decision of the management to transfers-list players like Thomas Abbey, Vincent Atinga, Kwame Kizito, Fatawu Mohammed and Paul Acquah?

The decision, though silent among the management and was never made public, those of us close to the team knew it and fought vehemently against it. Those players are the backbone of the club now.

Have you observed the astronomical rise of Vincent Atinga in an arithmetic style into a super player? What about Kwame Kizito and Fatawu Mohammed? I believe they are just examples of Nuttal's handiwork.

I remember Hearts fans pressuring Nuttal to use Cobbina but he held his balls and stood his grounds to allow the player to be fully fit before playing.

When the initial squad of the Black Stars B was announced in May, Fatawu Mohammed, Patrick Razak and Winful Cobbina were in the list. Thomas Abbey joined later, taking the number of Hearts players to 4 in the squad.

No one ever thought that a time will soon come for many Hearts players to get national calls ups as it happened under Nuttal. I am still struggling to remember the last time 4 Hearts players earned call ups into the national team.

The number even swelled to 5 before the WAFU Cup of Nations and their performance was a demonstration of physically fit players.

Now, Atinga is in the mainstream Black Stars whole Cobbina has had his bite of the same side.

Cobbina and Abbey were magicians at the WAFU tournament, Atinga - a revelation, Kizito - stupendous and Patrick Razak, sensational - all thanks to Frank Nuttal.

From my perspective, the fitness levels of the players, their tactical comprehension, their determination to achieve and above all their 'Never Say Die' spirit say a lot about Frank Nuttal.

Undoubtedly, Frank Nuttal is a good coach and will obviously put the club where it is supposed to be if he is given enough time to steer the club.

However, many coaches and club officials have complained about his conduct on the lines, with claims that he does not show respect to his colleagues which I personally witnessed during the side's clash with Tema Youth and Aduana Stars.

Nuttal had a bust-up with Tema Youth President Osei Parmer and Aduana Stars coach Yusif Abubakar after their respective clashes at the Accra Sports Stadium.

He's human and is bound to have flaws. He must only work on his working relationship with his colleagues on the touchline and, zoom, Nuttal will be the best in the system soon.

Regardless, let's applaud him for transforming the continental club masters - Accra Hearts of Oak.