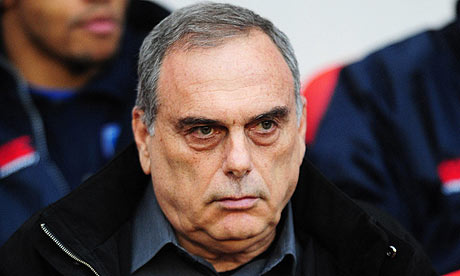 Avram Grant is the full name of the soccer coach Ghana has contracted to manage her national team, the Black Stars, for the next two years, starting this December. If this coach has a nickname, Ghanaians do not know yet.

But it might be worth his while to learn that his new charges have been called â€œwildebeestsâ€ behind their backs. Why wildebeest of all animals? The answer is that the Black Stars behave like that safari animal when they are under attack.

Wildebeests are strong animals that migrate in their hundreds and they do so in a stampede, especially when they are crossing a stream. Unlike baboons and lions that have natural leaders during migrations, wildebeests move en masse and bump into one another. The unruly nature of wildebeests renders them easy prey to crocodiles that tactically lay ambush for them. They tire quickly and cannot sustain long struggles in the jaws of the amphibians.

By inference, the Black Stars appear disorganised against tactically disciplined and well-drilled teams; they tire quickly and lose shape. This might sound a hard comment to make about a national team that, out of three consecutive World Cups, had made it to the last 16 teams on two occasions. Â However, a quick review of all major competitions involving the Black Stars from 2006 to 2014 would reveal that by some fluke, they manage â€“only just manage Â -to sneak past better opponents. Thus at the end of every game, supporters sigh: â€œWell, any win is a win but did we really win, were we lucky?â€ Sometimes they say: â€œThe coach has so much work to do on this team.â€

Indeed, the Starsâ€™ game is strewn with faulty passes, a clueless mid-field kick-abouts and porous defence that concedes easily to opponents. Â Poor wing play or useless crosses are some of their blemishes. Some analysts may point out more.

Avram must have had a flavour of what to expect from the nature of the questions he fielded at his unveiling. Nonetheless, it would not be out of place to educate him on the three pillars around which the Ghanaian mentality revolves.

First is politics. The Football Association is so chronically cash-strapped that whilst holding fiercely to their autonomy, they cannot do without government funding. Thatâ€™s where a coach might be caught in some of the sparks between an arrogant Ghana Football Association with supporters of â€œcoefficientsâ€ of journalists on one hand and politicians on the other hand.

Second is our religious worship. Ghana is a secular state but our belief systems greatly influence our confidence and the way we bond and execute team-tasks. Avram should not be surprised that the talisman, the Koran, the Bible and some queer rituals of â€œways and meansâ€ are going to feature a lot in the winning psyche of his players.

Third is football. It is the one event that makes the Ghanaian feel Ghanaian. We jubilate in victory as Ghanaians and we feel deflated together in defeat. When we are defeated, we look for a scapegoat and the coach is obviously an easy one.

The three pillars of our values mix freely when our emotions run riot. This is to the extent that we do not always assign footballing reasons to our defeat. We are unreasonably nationalistic about this to the extent that we are not prepared to accept that our team is not good enough to win a tournament. Â Avramâ€™s task is how to make do with the material on hand.

Unlike football clubs owned by oligarchs with a loose purse for buying the best players from any corner of the world to make a coach succeed, a national team has only the nationals. Thatâ€™s why if in his professional opinion the Sule Muntaris, the Kevin Boatengs, the Kwarases and the Essiens can deliver for him, why not? He should go for them. The good thing is that he had ever managed some of these characters successfully in the best league there is. What is simply at stake now is individual ego which the coach must address urgently.

Ghanaians are easily hospitable people but they are very hard to please when it comes to football. As the saying goes, any foreigner who accepts a coaching job in Ghana must come here with a purpose. Avramâ€™s purpose must be to confound Ghanaians with results which will make them heap on him titles such as â€œSoccer-hene,â€ â€œAgro Mancheâ€ or â€œAvram the Great.â€ It is not only his employer, the GFA, which would take issue with him if his coaching only perpetuates frenetic wildebeest soccer. The fans will be the first to bay for his exit.

We have seen Burkina Faso, South Africa and Cameroun improve the quality of their soccer in recent times. Why canâ€™t Ghana too, with Avram at the helm of affairs?