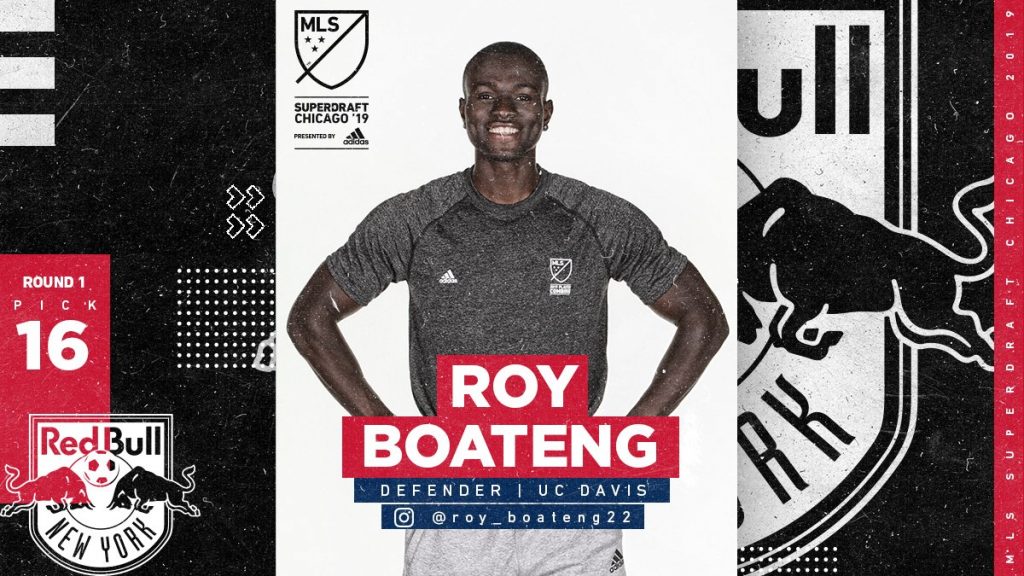 Senior defender Roy Boateng was drafted in the first round of the MLS Superdraft at No. 16 overall by the New York Red Bulls on Jan. 11.

The recent managerial economics graduate was born in Accra, Ghana and came to the states as a young boy.

Boateng is the third Aggie alumni drafted into the MLS; he earned one of 60 invitations to the MLS combine in early January and participated Jan. 3 through Jan. 9.

Before the draft, the New York Red Bulls acquired two draft picks in a trade with FC Cincinnati for $100,000 according to the Red Bulls website, one of which was used on Boateng.

Boateng racked up a number of accolades in his four year collegiate career, earning All-Big West Conference awards in all four seasons and first-team honors in his last two.

As captain of the men’s soccer team, Boateng led the Aggies and the defensive line to eight total shutouts in their recent 2018-19 season, tying the mark for most shutouts in a season since the program was brought up to the Division I level.

The Aggies made it to the Big West tournament championship game back in November, but lost to UC Riverside in penalty kicks.

The California Aggie had the chance to speak with Boateng about his journey to the draft, and his feelings on playing in the MLS.

Aggie: Growing up in Ghana, what made you fall in love with soccer and when did you realize that this might be what you wanted to do as a career?

Boateng: So in Ghana, soccer is the national sport, it’s in everyday life and it’s a part of the culture. Since when I could grasp what soccer actually was (rules, etc.), I fell in love with it. I played with the neighborhood kids and it was just fun. When I got to the states, I joined soccer teams to assimilate and make friends, but I also knew I had a love for it and I have been playing ever since. It has continually been fun, and from when I was a little boy, I knew this was what I always wanted to do.

Aggie: Recently graduating from UC Davis, can you speak a little about what playing at Davis did for your progression as a player?

Boateng: Davis has been wonderful to me, and I have enjoyed every moment there playing with those guys and under Coach [Dwayne] Shaffer. [He] helped me develop as a player and as a person. Coach Shaffer helped me do that by putting me in a leadership position on the team so I think I grew a lot there. Playing so many minutes helped me gained experience. Outside of soccer, Davis is a wonderful place and a wonderful community, and everyone was just really pleasant.

Aggie: Going into the MLS combine, what were you feeling? Nervous to try out? Or excited and ready to show off your skill?

Boateng: When I got the invite, I was very happy and excited to go and play. I was the only person in my conference to get that invite and it meant a lot to me, and I went in with something to prove to represent our conference and my school. I was very excited to showcase myself.

Aggie: Overall how did you feel the combine went? Did you have any idea what teams were interested in drafting you after you completed the combine?

Aggie: What was that feeling like when you were drafted in the first round by the New York Red Bulls?

Boateng: I was filled with every possible good emotion at once. It was incredible. I got up out of my seat and all of a sudden forgot where I was supposed to walk to the podium, so it was a really cool moment. I was hoping New York would pick me, but I wasn’t expecting it at that time. I just kind of closed my eyes and when I heard my name I was elated.

Aggie: What has the support been like from your family and friends when they found out you were drafted?

Boateng: It was incredible. I couldn’t really check my phone at the time, but it was going crazy with a lot of text messages and calls of congratulations from friends and family, so that was really cool. They were a part of it [the moment] because I never would have gotten where I am without them, so I am very blessed from the support from my friends and family.

With the 2019 MLS season set to start in early March, look for Boateng to step onto the field representing the Red Bulls and the UC Davis Aggies.