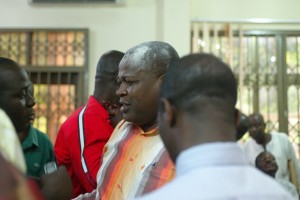 Thursday saw the conclusion of the first half of elections of members onto the Executive Committee of the Ghana Football Association.

The next half will deal with elections of the Regional Football Association Chairmen who have automatic slots on the powerful committee to kick start a new four-year era of phase two of the Kwasi Nyantakyi led regime.

However, one cannot let go of the drama, twist-and-turns, disappointments etc that characterized the elections over the past two days.

Hence, GHANAsoccernet.com takes a comprehensive stock of accounts with specific reference to day-two where even more candidates were vying for just four slots as compared to a day earlier where 6 slots were up for grabs for relatively less contestants.

This piece is segmented according to performance of candidates in the elections held on Thursday at the Conference Room of the Ghana Football Association's Secretariate in Accra.

Fred Pappoe (41 votes): If there is one clear lesson to be learnt off this elections, it will be how a candidate should present himself to delegates. More often than not, candidates gave into the temptation of over-emphasizing on what they have done or achieved in the past rather than present clear-cut visions for the future.

This in my view is what The Ghana FA Vice President did well to avoid even though he had the better dossier going into the elections. He was brief, focused, spoke to the issues confronting Division One and more importantly offered clear cut ways he could help solve them within the three minutes allocated for contestants to finally convince delegates to vote in their direction.

No wonder he emerged with the Lion's share of votes - an overwhelming 41 from a possible 48 valid votes cast. Kudos to him, this is a feat well earned by the man popularly referred to as 'Papsay'.

George Afriyie (36 votes): This was a candidate who knew the terrain all too well. His message quiet catchy but many are off the same old stuff. To be fair to him though, I believe he is one of such personalities that are needed within the power rooms of Ghana Football.

His equivocalness and his accessibility to the media to provide analytical arguments are things one could never do away with. Well play to him then but he should know he is gradually loosing grip and must sit up.

Wilfred Kwaku Osei 'Parma' (32 votes): If a day earlier, most of the business moguls up for election in the Premiership slot found their way through, then definitely we should have competent people who can manage the 'massive wealth' expected to come through the game. This is what or who Parma represents. Not only that, his experience in both the Division One and Premier League as well as his knowledge in finance could be of vital need during deliberations on the executive committee. The fact that he was the well-dressed candidate on the day made it even more worthwhile and goes a long way to show the seriousness he attached to his campaign.

Kwaku Eyiah (24 votes): Not the most notable name to the public but the learned lawyer's cautious effort to stick to the rule book earned his a place but was agonizingly close. Just like Fred Pappoe, Eyiah stuck to much of what he intends doing as against what he had achieved in the past and that trick seemed to have worked the magic.

Delali Senaye (23 votes): The young under-dog sprung the surprise of the contest though fell short of glory by just one vote to Kwaku Eyiah. I am sure just like Asamoah Gyan's penalty miss at the 2010 World Cup, Delali will be wondering for at least the next four-years how near he was but yet still quiet far from glory.

Kingsley Osei Bonsu 'Lord Zico' (11 votes): A very likeable candidate but committed similar error as majority of the losers. He went on and on about his contribution to Ghana football when in actual fact he should be focusing more on what is left in his tank to offer. I hope defeated candidates take serious notice of this trend.

Dr. Hayford Cudjoe (7 votes): Demonstrated very well why he should stick to his medical practice rather than contest elections in football circles. His presentation was boring and dragged on for far too long. I wonder even if 10 people listen to him make his introduction. Olloboi Commodore (6 votes): Another very popular person in football circles but was terribly guilty of overstating what he had done in the past as against what he intended to do. Better luck next time.

Jojo Duncan (5 votes): Struck a harmonious cord with the gathering with his distribution of packaged 'Gari soakings' but failed terribly to win votes. I must however say the distributed refreshment tasted really good and was very nutritious.

Peter Humo (3 votes): Was obviously never in contention and this clearly manifested in the results.

Mac-Paradise Okocha (2 votes): The biggest disappointment on the day by far. He for whatever reasons failed to show up on the D-day. Even his colleagues were found fumbling for words when quizzed about his whereabouts.