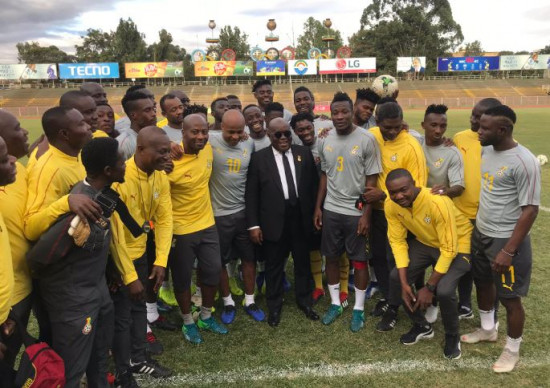 President of the nation, Nana Addo-Dankwa Akufo-Addo, is expected to host the Black Stars to a farewell dinner ahead of the team’s departure to Dubai for pre-2019 Africa Cup of Nations camping.

It would be exactly 19 days or so to the start of the Egypt Nations Cup should the Friday gathering takes place.

The cynosure of all eyes, doubtless, will irrevocably be fixed on the upshot of that meeting - for various reasons-especially in view of the latest happening in the team with regard to captaincy.

Indeed, the appointment of Andre Dede Ayew as new captain of the Black Stars, a couple of days ago, brewed a pretty kettle of fish in the team, with then skipper Asamoah Gyan (now assigned a general captain’s role), swiftly announcing his retirement.

Gyan has captained the Stars in the last seven years or so, taking the team to the last two Nations Cup tournaments.

Opinions were, therefore, pleasurably divided over Gyan’s retreat. He was condemned, but others lauded his decision and rather took the coach – Kwesi Appiah, to the cleaners for trying to rock an unruffled boat ahead of a Nations Cup Ghana has been chasing to win for the fifth time since the 1982 unprecedented feat in Libya.

The media hungrily fed on the pell-mell and tore it apart. It was expected, though.

Heftily concerned about the brouhaha, President Akufo-Addo invited the coach to the Jubilee House to give him a rundown on the situation.

At the meeting, Appiah stuck to his gun. The President understood him, flawlessly. He, subsequently, called Gyan at his Turkey base and asked him to rescind his decision. It was a presidential intervention and the Ghana legend goal-poacher could only meekly make a U-turn, availing himself for selection.

Gyan's reversal or annulment of his retirement also triggered its own idiosyncrasies.

Many followers of the Black Stars still believe that all is not well in the team.

They dread a repeat of the 1992 Nations Cup imbroglio in Senegal where factionalism – as a result of captaincy - tore the team’s aspirations into tatters.

It is for this saturnine backdrop that President Nana Akufo-Addo’s meeting with players and officials of the team on Friday is of monumental significance.

Without any shred of doubt, the President will be expected to hammer on team unity and make it very plain to the players that Ghana is bigger than all of them! Indeed, they would be told to bury their ‘bloated’ egos and differences, and put the nation first.

Of course, the seeming tension between big brother Gyan and his junior Andre Ayew would not be put on the back burner, at all.

The duo carries the heart of the nation. They are all-too vital to team unity, harmony and cohesion. If Ghana would win the Cup, it should depend on what they do to the team. Truth is that, Gyan and Dede Ayew can make or unmake the Black Stars through their attitudes, after their meeting with the President.

They should be made to know; perhaps, if they have forgotten – that it was Ghana that first offered them the platform to blossom into what they are today – and it is high time they paid their dues to the long-suffering Ghanaian fans who have followed them through thick and thin.

For coach Kwesi Appiah, let him continue to be his own man, especially in Egypt. He must ensure mutual respect and discipline among the players.

He should have the boldness to flush out players who display gross disrespect and contempt for their colleagues and officialdom at the tournament.

Team spirit must necessarily be high and jealously guarded – and that is what he must endeavour to do as manager.

We need to remind ourselves that it is now a weeping 37 years since Ghana won the Nations Cup. It is shameful!

Indeed, it is sad commentary that Ghana had reached the semi-final stage in each of the last six tournaments, but has failed to lift the trophy.

In 2015, the Stars were upstaged by Cote d’Ivoire in the grand final, through the shoot-out after 120 minutes of nerve-jangling football.

Before then, the Stars had lost 1-0 to Egypt in yet another finale of the Angola 2010 championship, and of course, as far back as 1992 stumbled in the lottery of penalty shoot-out to Cote d’Ivoire.

Now, Ghana is rapidly gaining notoriety of qualifying for tournaments they cannot hope to win. And, this is the major reason why you no longer see the red-gold-green flags flying when they play.

This is not a matter of lack of nationalism, patriotism or loyalty.  The let-downs are a bit too many to warrant this distressing trend.

Let us not be pretentious about that. If a team you support wholeheartedly makes it a routine occurrence to let you down always when the expectation is all-too high, your support will naturally wane one day.  That is the situation now.

Is it not upsetting and disconcerting that when Ghana won its fourth Nations Cup in 1982, Cameroon had not even set eyes on the coronet for once? Today, the Cameroonians have gone ahead to snatch it five times and would be going to Egypt as defending champions. We are still firmly rooted!

In the same vein, the Pharaohs of Egypt had lifted the trophy just twice at the time Ghana clinched it for keeps in 1982. Interestingly, the Pharaohs have gone ahead to annex it a staggering five more times (seven in all).

Again, today, we are not only known as the sleeping giants of African football, but we have slipped into a nadir of shame and ignominy due to a disturbing culture of mediocrity which our players must be determined to reject in June.

If the players are not ready to show patriotism, unity and the zeal to carve out something for the nation, where do they expect to elicit the support from?

Ghanaians need the Stars to show a lot more commitment on the Egyptian pitch and be ready to die for the trophy.

When the Holy Grail eventually touches down, we shall celebrate them wildly and their names would be emblazoned in gold – not only on the streets of Ghana – but in the very bottom of our hearts forever! -