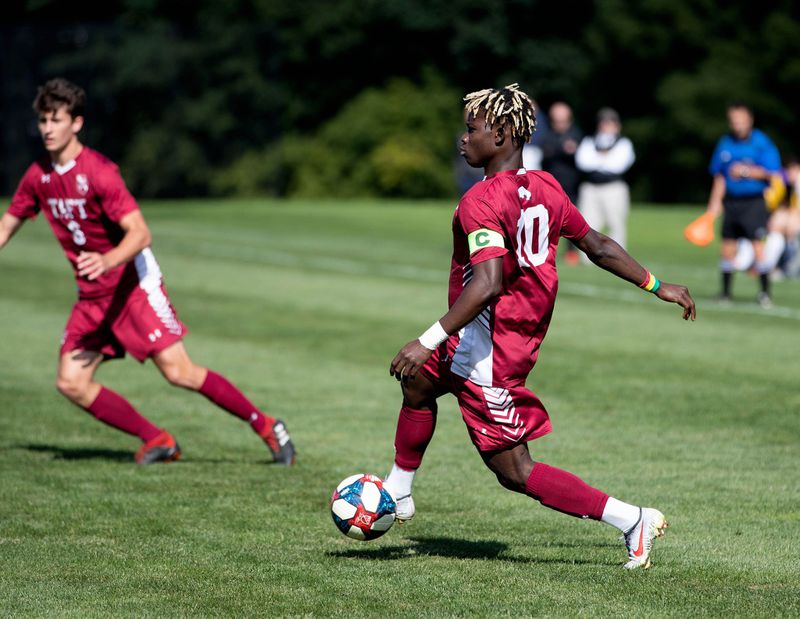 When Ernest Sammed Bawa was a young child, growing up in the slums of Ashaiman outside of the capital city of Accra in Ghana, he and his friends would see airplanes and run and chase after them as they flew across the sky.

“My dream was just to sit in an airplane,” said Bawa, a senior at the Taft School in Watertown. “I kept thinking to myself, one day, I’m going to be in that.”

This week, he will be flying to his official visit to the University of North Carolina, where he was offered a scholarship to play soccer when he was a sophomore. He flew in a plane to the U.S. on his way to Taft, after he was accepted to the prep school through the Right to Dream Academy in Ghana, a soccer academy which helps underprivileged kids in Africa realize their potential. He flew home this summer for the first time since he left three years ago to put on a soccer tournament for kids in Ashaiman and he realized how far he had come in his life in only a few years.

“The odds are against him [being here] are astronomical,” Taft soccer coach Ozzie Parente said.

Bawa was the first of the Right to Dream kids to come to Taft from Ghana. Since then, three others have arrived: Kelvin Baffour is a sophomore teammate and the girls soccer team has junior Patience Kum and freshman Precious Novidzro.

Bawa’s father died when he was young and he was raised by his father’s brother and his wife. His mother was alive but he didn’t meet her until he was about nine years old, he said. He loved soccer and played any chance he could but the mindset where he lived, he explained, was that there was school and there was soccer. You couldn’t do both and be successful and his uncle, he said, wanted him to focus on school and not soccer. He had to sneak out of the house to play.

He played with a local team and one day, there was a tryout to play at the Right to Dream Academy. Over 500 players were there. About 20 were chosen for the next tryout at the academy in Accra. Bawa had to sneak out of the house again, he said. He made the next cut and the next. Three kids were chosen to stay. He was one of them.

He got good grades and was chosen to apply to go to a prep school in the U.S. On his first try, he was rejected.

“John called me pretty close to the admissions deadline, end of February – he said, ‘We have this wonderful boy and he’s going to get some unfortunate news as far as admissions is concerned to another school. His bags are packed and he’s ready to go. Anything you think you can do?’” Parente said.

“I went to our director and said, ‘We have a chance to do something really special. This will kick off what I think will be a fantastic relationship.’ So Bawa got the rejection letter [from the other school] and a few weeks later, he got the acceptance letter from Taft.”

Bawa fit in quickly and soccer was a big part of that. Now, he’s known simply as Bawa.

“He has chosen to go by Bawa because he feels an obligation to his family,” Parente said. “I think there’s also an allure of being a one-name wonder in soccer. Everybody knows who Bawa is. On campus. On other campuses. He’s electric. He’s incredibly talented. Explosive. Powerful.”

Wake Forest and Georgetown, among others, were interested his freshman year. But Bawa wanted to go to North Carolina, which won NCAA titles in 2001 and 2011, and he accepted the school’s offer the next season.

He would like to go home again to put on another tournament but isn’t sure if he will be able to. He raised over $6,000 on a GoFundMe page for the tournament in June. He had to pay for the field, T-shirts, cleats and shin guards, officials, trophies as well as security. Before the tournament, he wanted the kids to know that if they worked hard, they could do both soccer and school and that in fact, soccer might be an avenue for them to go to school.

“One of the things he said was that when he was [younger], he was competing against his peers for a livelihood, in a way,” Parente said. “And he realized there were boys who were left behind. Not everyone was as fortunate as he was. He wanted to try and inspire somebody to continue to believe.”

And in turn, Bawa was inspired.

“The season before that, I was not playing like I needed to be playing,” he said. “People thought I was doing well, but I know my standards and I was not doing well.

“Going back home gave me the opportunity to hit the reset button. I saw kids who were fighting just to play in that tournament. I was forgetting where I came from. Going back and organizing that tournament helped me more than it helped the kids.”