I recall very well that one of the major reasons for the construction of the Tamale Sports Stadium is to give the people of the north a feel of football excitement associated with the various national teams especially the Black Stars.

It is however imperative to know that the Black Stars and if I am not mistaking, any of the junior teams and even the womens team are yet to play a competitive fixture in Tamale.

Why is that, aren't they Ghanaians, don't they also deserve to once in a while see in flesh their gallant heroes?

Why are Black Stars games limited to only Accra and Kumasi and only once in Sekondi but none in Tamale?

One very laughable argument put forward is the capacity (20,000) of the Tamale Sports Stadium.

Those for this argument say maximum revenue needs to be milked out especially in Black Stars games to defray the cost involved.

If that is the case, we might as well tell the people of Tamale and its environs vividly in the face that their stadium is only good enough to host Premier, Division One, school and college friendlies (if they can afford it) and not even the national U-23 team.

What does this make of government's policy of equity and proper allocation of the national cake? And what does it make of the edifice that cost the Ghana tax payer including northerners in excess of $20m to put up?

I have also heard others say the stampede experience at the Essipong Stadium which has a similar capacity to Tamale's when Ghana played Lesotho in the 2010 Africa and World Cup qualifier might be a factor. Need I say its another laughable point?

Not only was security at Essipong woefully inadequate on that day, but then the vague greed of some few people who cherished money over the security of the majority in the arena was in full force.

This can easily be avoided in Tamale with the necessary and right personnel who will come and do a good job for mother Ghana. 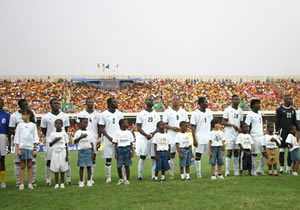 We are all aware of the magic of football which is able to pull together people from diverse backgrounds. Lets just imagine what a Black Star game could do to minimise the political tension and rivalry in the north.

It is high time we 'give what belongs to Cesar to Cesar'. The Tamale Stadium is long over due a competitive national team fixture so the people in the north also feel part of this great nation Ghana.