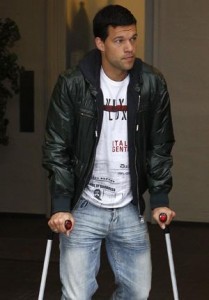 Overnight, the Portsmouth midfielder has become public enemy number one back in his 'home' country of Germany, an experience no footballer deserves.

David Beckham suffered the same fate following his sending off against Argentina in the 1998 World Cup, when effigies of the England midfielder were burnt in London's East End and he was so widely vilified in the aftermath of his indiscretion and his nation's subsequent exit from the tournament, it was almost frightening.

Boateng currently finds himself the subject of numerous social networking groups - such as '82,000,000 against Boateng', 'Boateng: Enemy of the State' and 'Kevin-Prince Boateng, give your German passport back' - set up by angry German fans following their national captain Michael Ballack's unfortunate injury.

The Chelsea midfielder's torn ankle ligaments, sustained in the weekend's FA Cup final, will keep him out of the World Cup and because this is football, and because we are talking about football fans, a scapegoat was absolutely necessary.

Step forward Herr Boateng, whose tackle it was that left Ballack limping off the pitch with an ankle so swollen that he had to wait until Monday to undergo a scan.

It was an ugly challenge, no doubt. But it was mistimed, not malicious. To suggest that Boateng, whose adopted nation of Ghana will meet Germany in Group D in South Africa, was thinking of bettering his national side's chances of success when he piled in on Ballack is ludicrous.

That Boateng was born in Berlin and has appeared for Germany at U21 level are merely convenient coincidences, pounced upon by those looking to vent their anger at Ballack's impending absence from the World Cup.

We've seen this before, haven't we? The accusations, the recriminations, the public witch hunts, only a little closer to home. Remember Aldo Duscher? That evil Argentine who was clearly out to wreck Beckham's chances of appearing at the 2002 World Cup, at which his nation was to meet England?

Like Argentina, Portugal played England at the finals. And more recently we've seenLandon Donovan of Everton and the US, acting with nothing but the Stars and Stripes in his mind, put in a challenge on Ashley Cole that left the England left-back with a fractured ankle.

Beckham and Rooney both recovered in time, just, as has Cole for this summer's tournament, but all three of their aggressors came in for stick. Especially Duscher, but probably only because he is Argentinian.

English players themselves have also been accused of ruining a country's prospects - Martin Taylor and Lee Bowyer found themselves in the firing line of Croatian FA chief Vlatko Markovic during their ultimately failed bid to reach South Africa.

The Birmingham pair, you see, had crocked Eduardo and then Luka Modricrespectively, prompting the obvious conclusion that, being English, they had wanted Croatia to be deprived of two of their best players when facing England in the qualifying tournament.

Of course, it's all nonsense. Boateng no more wanted Ballack out of the World Cup than Duscher did Beckham.

The point is that injuries happen in football. So too do bad tackles. Indeed, one usually follows the other. Some injuries are worse than others, while some stand out not for the brutality of the challenge that caused them, but simply because of their unfortunate timing - like Ballack's and all those mentioned above.

At least Ballack himself seems to understand that, the German saying: "Of course I am very angry and disappointed but in football one should let it go."

It is a noble stance to take, especially for someone who will miss out on a third World Cup and in all likelihood never play again at the tournament. But it is the right one. So vehement has the public outcry been against Boateng, he has been forced to apologise for his tackle, although had the challenge been made 12 months ago, with no World Cup to worry about, there would have been no need.

This particular outcry seems to be entirely circumstantial. And for that, Boateng does not deserve such levels of vilification.

Indeed, if anyone has a right to be angry with Boateng, it is those Portsmouth fans who watched their FA Cup dreams flush down the pan with his glaring penalty miss at Wembley - by far the worst crime committed on the pitch that day.