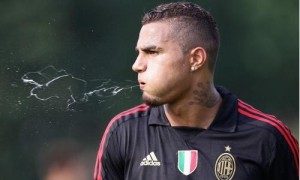 Raise them up to the heavens; send them crushing down to earth. It is a skill that Ghana football learnt well from those who taught us how to play the game, the British.

Rarely do we acknowledge that we are from the same breed, that we mustered the art long ago of praising when we feel like it and condemning in no uncertain terms when we have to.

This week Kevin-Prince Boateng has been the one to discover that. Last year he warmed his way into Ghanaian hearts with a series of fine performances at the 2010 world cup as Ghana reached the quarter finals. He was committed in the tackles, he was passionate, he could play too. And it helped for his large legion of female fans that he had good looks according to them. One lady called him an eye candy.

It is unlikely those fans will be too bothered about the storm gathering around him now. For those who chose to focus on the football he provided a good reason to forget about the absent Michael Essien. And when he scored against the USA he sealed what those of us watching then were convinced will be a long love affair with Ghana.

We were wrong. Or at least at this stage so it seems. When Boateng was all willing, all available in the build up to the World Cup, he has developed a habit of being injured just before Ghana games and recovering moments afterwards.

And when he claimed he could not travel to Brazzaville because of an injury but made the trip to London a few days later making himself available for a friendly against England, he fed himself to the waiting critics. He in the eyes of many was picking which games to play. He was unwilling, many argued to put in the difficult, less glamorous shift but is always available for the ones that generates more eyeballs and translates into more hype.

He did travel to Kumasi for the Nations Cup qualifier against Congo and put in a 60 minute shift that so upset Ghana coach Goran Stevanovic. It was not that Boateng did not play well. The consensus was that he just did not try, spent too much time complaining and was hauled off.

So Stevanovic wanted to clear few things up with the player. One phone call did not yield much because he was heading for training, the other came with the I would call you back excuse that many people feed when the last thing they want is to talk.

Since then he has been left out for the friendly against Nigeria that did not happen and now the home game to Swaziland followed by the friendly against Brazil. One website called the omission humiliating. This week the AC Milan player, in fine form for club by the way has become a major subject on Ghana radio for all the wrong reasons.

He has become the focal point for a passionate debate about the practice of convincing players with Ghanaian roots who may have grown up in Europe to play for Ghana and whether they have merits.

It is a policy that Ghana has been committed to but one that has always not worked well. Quincy Owusu Abeyie snubbed us for a while and then decided to change his mind just in time for the 2008 Nations Cup after realizing he wonâ€™t be getting into the Dutch national side.

Boateng convinced us to go all out on the back of his solid displays for Portsmouth. Those who argue Ghana gave him the platform to go to AC Milan may have a point but forget conveniently that this was one of the most sought after teenagers in European football when he joined Tottenham Hotspurs in 2007.

Still you would expect the commitment level to be a lot more intense even when he served notice when he joined up with Ghana that he had chosen to play for us because Germany did not want him.

He told me in an interview last year how he had made a decision with his head not his heart but promised he will give his all for Ghana. "I made a decision from my head but my heart is 100% Ghanaian now.''

The days after the World Cup have suggested otherwise. In nine games since then he has played two. And in both he has looked like a man distinctly uninterested. On a trip to Swaziland, he spent half the time complaining about everything. In Kumasi the effort was just not there.

So he has released the media wolves who have taken the bait for you have to say justified cause. Yet the suggestion that on the back of Boateng's attitude Ghana should ditch the policy of encouraging players like him to represent the Black Stars is absurd. When quality becomes available, you go for it. And that policy so long as it is not abused will serve Ghana well if the players will understand what the sport means to us here and let it show in their approach.

We love our football here. We pride ourselves on that. Above everything too we are a proud people unwilling to be taken for granted. It is the point that the week of frenzied discussions about Boateng has sought to make to him. It is as if to say to him if you don't feel up to it walk.

If he wants to, Boateng can always win the love back. It is easy here. Say the right things, turn in a few outstanding performances and let us carry on. He could ask a few players for advice in that regard. There is the story of Asamoah Gyan who is loved now more than before. In 2008 he had a worse public image and profile than Boateng.

Michael Essien's commitment got some minutes on the floor of parliament after the 2006 Nations Cup. By the time the 2006 World Cup was over we had forgotten even if that did not last.

And then there is Boateng's close friend Dede Ayew. We pummeled him so hard after the 2008 Nations Cup but he says he laughs about it now. The last time he stood up to warm up in Kumasi, the applause from the crowd in Kumasi was immense. That is how you do in Ghana. You prove commitment by deeds, not words. The deed from Boateng since the world cup does not suggest the heart commitment transplant from Germany to Ghana is complete yet. And that we don't like.