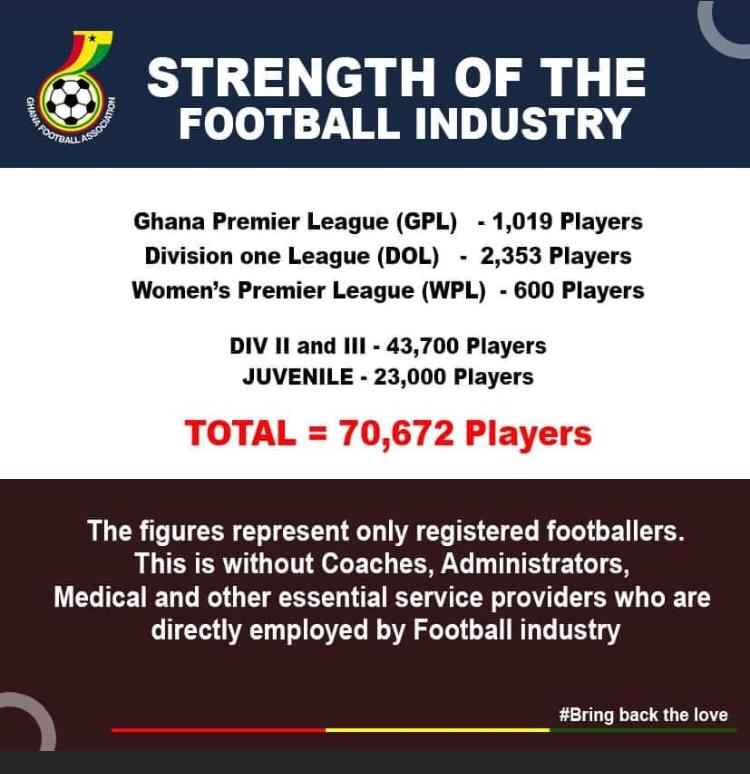 A few hours after President Akufo-Addo delivered his 12th COVID-19 address to the nation, an artwork which sought to paint the strength of Ghana Football to the Ghanaian economy started circulating on social media.

One may ask that what is the correlation between the President's address and the GFA-inspired artwork, which allies of the current GFA leadership shared with enthusiasm?

Well, for those who are in a quandary, the leadership of the GFA, despite the overwhelming risk contact sports present in the management of COVID-19, has been pushing for the resumption of football in Ghana through all kinds of tactics including propaganda.

As the President's latest address failed to touch on the resumption of all contact sports, the GFA leadership, led by its President, Kurt Okraku, resorted to what is clearly an emotional blackmail of the government to further their campaign of forcing government to get contact sports back.

In the GFA's haste to pile pressure on the government, they produced an artwork which claimed the Ghana league employs a whopping 70,672 footballers.

As for the juvenile level, the least said about the figures the better.

How can the GFA tell the world that juvenile clubs employ 23,000 footballers when the laws of Ghana frowns on child labour?

Juvenile players are supposed to be young players of school going age so how do you employ them?  How much are they paid?

If this is true, then the GFA is supervising illegality.

The question everyone will ask upon seeing the artwork is what's the GFA, led by its President trying to achieve with this obviously false representation?

As I said, it is all propaganda, blackmail and outright presentation of falsehood to achieve a certain wish of forcing the government to lift the ban on football.

When I initially saw the artwork o  social media, I thought it had been produced by one of the praise singers of the GFA administration who had, in  throughout the NPP primaries over the weekend, attacked President Akufo-Addo for the government's suspension of football, which they thought was similar to a political primaries.

But then, when I saw that the GFA President himself has posted this propaganda material on his facebook page, it became too obvious that that piece of propaganda and blackmail was really produced by the GFA with the official endorsement of Kurt Okraku.

Now, somebody must inform the GFA and its leadership that the type of propaganda and blackmail they are adopting won't bring football back during this COVID-19 pandemic.

Asking allies and bootlickers to attack the government, and producing ridiculous figure to baselessly portray football's strength is a funny approach.

There is no way the GFA and its leadership can prove the bogus figures they put out! They can never! And if they can, I dare them to publish every detail on their websites.

When clubs register incredible number of players just to own them without paying them salaries, that cannot be employment! A serious investigation  by employment agencies on figures the GFA put out there will rather end up implicating clubs for registering players without paying them.

Indeed, if the GFA claims premier, division 1 and 2  clubs employ this rnumber of players, government will know through the taxes they pay to relevant agencies.

I can authoritatively state that even Premier League clubs' total monthly taxes for the players they emply, is nowhere near the propaganda and blackmail number the GFA has put out there.

GFA MUST GET SERIOUS

If the leadership of the GFA really wants football to safely return, then the bogus figures they put out there rather exposes their ignorance on what must be done for the safe return of football.

At places where football has safely returned during the COVID-19  pandemic, there has been regular testing of players by clubs and leagues.

Clubs and federations' readiness to conduct regular tests, and also adhere to stringent government protocols were some of the reasons which convinced their respective governments to ease restrictions on football.

Even for the premier league alone, which the GFA ridiculously claims has about 1,019 players, the GFA will struggle to assist the clubs to fund regular testing.

The GFA should get serious and come to the realisation that under the present circumstance, it will be too expensive and almost impossible to safely continue with the league.

The GFA and its President should stop blackmailing government with concocted figures on graphics.

And if the false figures are meant to soar up numbers to blackmail government for the unjustifiable demands for stimulus packages, then the GFA and its leadership has gotten it all wrong.

Clubs were promised by the GFA President that wealth would be created for them. Surely, chasing government for easy stimulus and churning out wrong figures to pursue an agenda is not the right path towards creating wealth.

If the President of the GFA wants the GFA to be taken serious, then he and his executives must present a comprehensive document with credible figures to defend the contribution of football to the Ghanaian economy.

When you cook figures, which even clubs know it is a lie, no one will take you serious.

As for the return of football and other contact sports, government will only do so when experts advise it is safe to do so.

It is quite obvious government won't be moved by propaganda and needless pressure.

The earlier the GFA and its leadership realises this, the better.