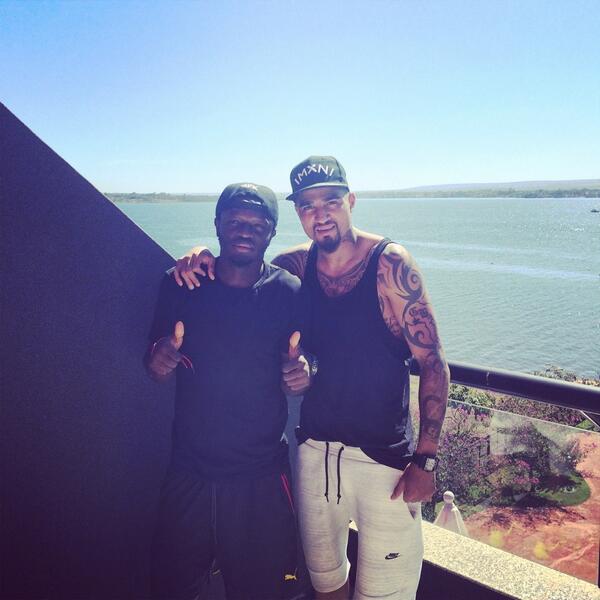 With the hiring of Avram Grant as the new coach to lead Ghana to the 2015 â€œEbola editionâ€ of the African Cup of Nations, the dust on that matter has settled and a new page has opened in Ghana football.

Ghana has been drawn in Group C, labeled the "Group of Death," with Algeria, South Africa and Senegal. With the absence of our playmaker Kwadwo Asamoah due to injury, we will need an equally good player to support Andre Ayew in the middle. Who can do this better than Sulley Ali Muntari and Kevin Prince Boateng?

But the big question remains: Should Avram Grant recall the duo?

When he was outdoored at a press conference recently, coach Avram Grant said the door was opened for the duo if only they show they are willing to play and sacrifice. Clearly, this is a free pass for the two to return to the squad.

Sulley Muntari - hate him or love him - has without any doubt served his nation on the pitch. Muntari was first seen in the national colours as a Black Starlets player at the 2001 UEFA-CAF Meridian Cup. Later that same year, he was chosen for the 2001 FIFA World Youth Championship in Argentina where Ghana won silver.

He graduated to the senior team and made his debut against Slovenia on 17 May 2002, and has since made 83 appearances and netted 21 goals for the Black Stars.

Needless to say, however, the young man's international career has been marred with one controversy after the other. Â Even though 2014 saw Muntari axed from the team, it was not the first time he was tagged with indiscipline. Let me refresh your memories just in case you have forgotten.

During the 2010 AFCON in Angola, Muntari was excluded from the national team due to disciplinary problems. After missing an international friendly against Angola, the then coach Milovan Rajevac snubbed him. He didn't make the AFCON team and later issued an apology to his country and coach.

Sulley's apology was accepted, and he was recalled as a member of the squad for the 2010 FIFA World Cup in South Africa. Unfortunately, once again he couldn't control his temper and emotions when he was not included in the starting line-up for the first two matches.

He was reportedly expelled from the squad for insulting Rajevac and his teammates, and it took the intervention of the then captain Stephen Appiah to recall him back into the team.

Preceding all these was an outburst by his mother Hajia Kande, who had in 2009 made a public statement on a Kumasi-based radio station, Fox FM, that, â€œNo Sulley Muntari, no Black Stars.â€ The public did not forgive her for making such a statement, but in her defense she was only doing what mothers do best, that is, defending her son after the media had launched an attack on him for challenging the then Sports Minister Mohammed Muntaka Mubarak over winning bonuses.

His compatriot, Kevin Prince Boateng, chose to play for Ghana over Germany in May 2010. He got his Ghanaian passport the same year and made his debut in a 1-0 victory over Latvia in June 2010.

Boateng was selected as part of the Ghana squad for the 2010 FIFA World Cup in South Africa to replace the then injured midfield dynamo Michael Essien.

Just when Ghanaians were beginning to feel comfortable with him as a replacement for Michael Essien, Kevin announced he was retiring from international football in 2011, citing fatigue from travel as the reason for his decision.

He subsequently missed both the 2012 and 2013 AFCONs. He reversed his decision, however, Â in 2013. The disgruntled Ghanaian fans voiced their anger and held the view that he simply wanted to play in the 2014 World Cup, hence his decision to rescind his earlier position to retire.

But Coach Kwesi Appiah felt he could be useful and invited him for the 2014 FIFA World Cup qualification playoffs against Egypt in October 2013.

He made the 2014 World Cup squad and the rest is history.

There have been several calls for the duo to publicly apologise for their actions, but the two have rather taken a defensive approach and have not apologized.

There is no doubt they are good players, and their contributions could boost the team to finally pick the long awaited trophy in the 2015 AFCON.

How would the rest of the players feel if Kevin and Sulley were brought back into the team and even got into the starting line-up ahead of them? Would their inclusion not introduce division among the players?

On the other hand, we have been hungry for a trophy for the past three decades, and if the experience and skills of the duo can help us break the 30 year jinx, why not?