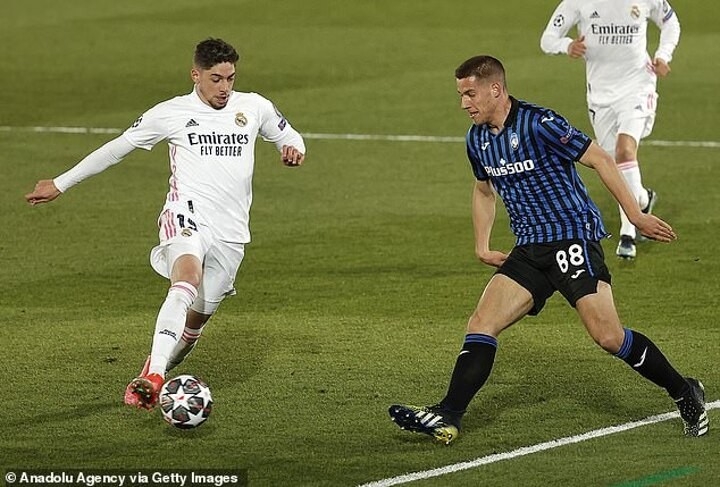 He's been likened to a young Steven Gerrard, and he grew up cheering every goal Luis Suarez scored at Anfield.

But before we ask Real Madrid's Uruguayan midfielder Fede Valverde about the Liverpool he faces tonight, we should ask him about the 'other one'.

'Of course there's a Liverpool in Uruguay too,' he says. 'They don't play in red, they play in Everton's blue but they were champions of the 'Clausura' (domestic tournament for the second half of the season). They played well, they deserved it.'

There's a club on every corner in football-crazy Montevideo where Valverde was born and 'Liverpool Futbol Club', founded in 1911 and named after the port the ships delivering coal had arrived from, is one of them.

Valverde beat them 1-0 in 2015 in his first and only season for Penarol before he joined Real Madrid aged 18. Penarol is very much his club.

So much so that he doesn't want the fact that he was happy about the goals Suarez scored for Liverpool back in the 2013-14 season to be misunderstood.

'It happens with [Edinson] Cavani at Manchester United now too. I want United to win and for him to score goals. That year pretty much the whole country supported Liverpool.'

Tonight they'll be backing Real Madrid against Liverpool. After overcoming a knock picked up during El Clasico, Valverde is likely to start for Zinedine Zidane's team. His industry will be needed on the right of midfield to protect a defence missing its two first-choice right-backs.

He started against Barcelona at the weekend and it was his surging run and pass that set-up the opening goal. It's the long-stride, box-to-box brilliance that have provoked the comparisons with Gerrard.

'I don't feel like I'm Gerrard,' he says. 'He was a hero for so many people. When I watched him on television I thought he was an incredible player, with those diagonal passes, his shooting, the bursts forward with the ball, I could spend 24 hours a day just watching him play.

'Lots of people tell me I have some of those traits, but he achieved what he achieved; he's a world star. I have to concentrate on what I can achieve.'

Aged 22 he is already a full international alongside Suarez and Cavani, another top player from a nation of only three million, where the competitive edge is honed early in the culture of 'Baby Football'.

'When you're a kid the first thing they throw you is a ball. I started playing Baby Football aged three and a half. Every weekend you go to the ground with your family or when you're older with your team-mates on the bus in your kit.

'In Uruguay, even the first division pitches aren't all grass so imagine in Baby Football. It's dirt pitches and when you go to take a corner there might be some animals there alongside you.

'But it's all part of it and you learn to fight for common goals with your friends; it makes you stronger. When you come back from a game with your face covered with dirt, mud dried in your hair, and stones in your boots – nothing beats that.'

Once instilled, that competitive streak never softens. It now extends to back-garden kickabouts.

His son Benicio is only just passed his first birthday. 'The ball is still very big for him,' he says. But there is rivalry with his wife, football journalist and River Plate fanatic Mina Bonino. 'I don't hold back,' he jokes. 'Or she goes past, or the ball, but not both!'

'I learnt a lot from him,' he says. 'I was almost always with him. Although my English isn't very good, his Spanish is brilliant. We spoke a lot. He is a magnificent player but he's a great person too.'

He needed friends at the time because it was a tough transition.

'I wouldn't say the move to Madrid was scary because when you're chasing your dream there's no barrier that can stop you. But leaving home, maybe for other people it's not an issue, but for me it wasn't easy at all. To be a long way from my parents, to not share my life with them daily was hard.

'Madrid give you everything, you have thousands of people there to help you, but that love of a mother and father is not the same.'

He had already been well mentored by one of his heroes Diego Forlan, who he shared a dressing room with at Penarol.

'He was a huge help and not just with football things,' he says. 'He gave me a lot of advice on a footballer's life and how not to lose your head. He told me that if big clubs were focussing on me it was because I had something good and than I should use that to motivate me.'

These days the team-mates are every bit as illustrious. Is it finally time to start lauding Toni Kroos, Casemiro and Luka Modric they way Barcelona's Xavi, Sergio Busquets and Andres Iniesta were?

'The six of them have won all there is to win, for club and country,' he says. 'They won things for Spain, Toni for Germany, Luka for Croatia and Casemiro with Brazil. And they've got Champions Leagues coming out of their ears.

'What could be better for me than to be able to share a dressing room with them? I only have to watch them to learn things. And obviously if one of them gives me advice I'm going to take it.'

Which of the three will he end up resembling most? 'It's difficult. I think the three together end up making the perfect player,' he says.

'Casemiro is always alert to everything that's happening on the pitch. He is quick and strong. He sees when spaces open up.

'Luka is dynamic and has that pass between the lines. And Toni has that patience and that ability to play without pressure as if he was playing in his own back garden. My game is more dynamic. It's more the Luka role.'

Tonight he's expected to start alongside the three of them and there are no illusions that the job is already done.

'When a team loses people usually say they played badly. But a lot of the time it's because of the virtues of the other side. We did things well in the first leg. We pressed well, we attacked well, and we defended the result well. What Madrid did was positive and what Liverpool did was maybe not so negative.

'And the fact that they lost 3-1 doesn't mean it's going to be all roses for us there. They will throw everything at Madrid. But we won't wait for them with our arms open, waiting to see what they have got. We will try to score and win the game.'

As a veteran of competing with the Uruguayan Liverpool, and their 10,000 capacity stadium, it would have been nice to play in front of 53,000 tonight.

'I would love to have played in a full Anfield,' he says. 'Having that pressure from their fans turning the heat up. That's the magic of football. Right now we can't enjoy that but when you are a professional you have to adapt to everything.'

That will be the Baby Football grounding kicking in again. 'You have to be ready for everything,' he says. 'I've played at grounds where there is no grass and no stands. They are not the best, but you just get out there and you enjoy the game.'