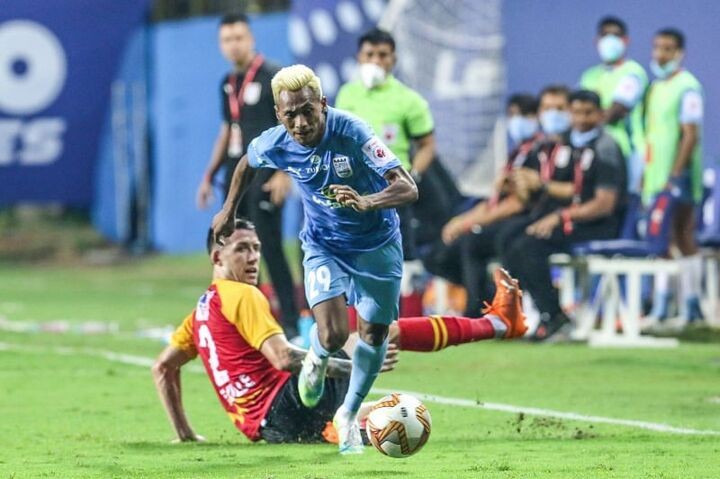 Fall to Hernan to Le Fondre to Mandar, a looping cross, a dash by Bipin, and a goal. The strike against Bengaluru FC was built over 25 passes and embodies Bipin Singh's role in Mumbai City FC this season.

In a free-flowing style of football, where players often change positions with each other, Bipin's sudden burst of pace provides the finishing touch to their patient build-up.

He has already bagged four assists this season, the most by an Indian player, which testifies his abilities to find the right people at the right time.

Having come up through the ranks at Shillong Lajong, Bipin Singh is having a breakthrough season under Sergio Lobera.

He has already played 922 minutes this season for Mumbai City FC, more than his previous two seasons combined.

Sportskeeda caught up with him in an exclusive interview where he discussed his family background, playing under Sergio Lobera, Mumbai City FC's title ambitions, and more.

Here are the excerpts:

1. Can you tell us a bit about your family background and where you were born?

BS: I was born in Wangoi, Manipur. I live with my wife, my parents, and two brothers. I also have a daughter. My wife is a housemaker, and my parents are farmers. My younger brother also plays football, and the elder one runs a small business.

2. What is your oldest memory of playing football?

BS: My oldest memory of playing football is when I traveled outside Manipur for the first time. I went to play some U-13 National Level tournament in Chennai.

3. Which all academies you played during your youth days and which all tournament did you participate in?

BS: I started playing football at the age of 8-9. I used to play for a local club in Wangoi itself.

4. Were your parents convinced to choose football as a professional career? What were the reactions?

BS: Reactions were quite normal because my dad was also into sports. He used to play volleyball for Manipur, and I would say he has always supported me with this.

5. Tell us about your feelings about signing your first professional contract with Shillong Lajong. And your experience playing there.

BS: After playing in Manipur, at the age of 17, I went to give U-19 trials for the academy, and I got selected there. So, from there I got a chance to play for Shillong Lajong. And, I played in both junior and senior I-League for Shilong in the same year.

I almost played for five years there and got a chance to learn a lot of things. At that time, there were also these big players like Renedy (Singh) bhai and Sushil (Kumar Singh) bhai in the team. So, it was a great feeling spending time and talking football with them over food.

6. A lot of players from Shillong Lajong are currently playing in the ISL. Who was your good friend at that time?

BS: Sandeep Singh, who has been playing for Kerala Blasters, was my roommate at that time. Then, we had Pritam Kumar (Singh) who is playing for East Bengal. So, we all were close to each other.

BS: I was doing some work at that time, and my agent called me saying that I have not been picked by any side this year. So, I got a little upset at that time, but later, I found out that my agent was doing a prank with me.

He told me that I had been picked up by ATK. It was a great feeling to be picked up by a team who were the defending champions of the ISL back then. I was so happy at that time.

I went with the mentality that there would be some big players with great experience in the squad, so I'll have to work hard and prove myself in whatever chances I get to cut the team.

So, in the preseason, I did well. I lived up to the coach's expectations, and from there, I got a chance to play in the ISL and score goals. I also scored against Mumbai City, I scored twice in that season. So, it was a great feeling to score my first goal in the ISL career.

8. What was your initial reaction when you learned that Sergio Lobera will be the head coach of Mumbai City FC?

BS: I was so happy that he'll be our head coach. Having played against FC Goa in previous seasons, we knew how difficult it was to compete against his side.

So, we were happy that now we will get a chance to play like this, play real football, and learn a lot of new things under him.

9. You have been a regular in this season under him, so how has your experience been working with him so far?

BS: It's been really great so far. Even if you'll commit a mistake on the field, he won't get furious that easily. Instead, he'll push you to improve.

He says don't lose the ball easily, just keep the ball with you, and enjoy your game. So, that really gives you confidence.

10. You have got more playing time under Sergio Lobera as compared to Jorge Costa in the last season of ISL. Do you think his playing style suits you more?

BS: Yes, his style of play definitely suits me. It feels like you are free to move anywhere on the field. You just have to keep the ball, and by doing so you don't have to play defensively.

While last year, we took a more defensive approach, and that was a little tiring. So, this time I am just enjoying and keeping the ball.

11. Experience so far living in the bio-bubble?

BS: Yeah, it's quite difficult to live in the bio-bubble. Covid tests every couple of days, then you are not allowed to go outside apart from training and matches, you just have to stay inside the rooms, and playing with the empty stadiums is a little tough.

You know, with fans, it's a different feeling altogether. However, personally, I don't think there's such extra pressure staying in the bubble.

12. You have players like Hugo Boumous, Adam Le Fondre, and Cy Goddard to help you in the attack. How is it like playing alongside them?

BS: I am really enjoying playing with them. I am learning a lot of new things such as how to finish, and how they live. They are a different set of players, so their experience would also be different.

13. Your combination play with Vignesh Dakshinamurthy seems to be a major avenue for Mumbai City FC's attack. Can you tell us a bit about that?

BS: He respects me a lot. He calls me 'bhaiya'. Just like a younger brother, he keeps on asking me, "what should I do bhaiya?"

On the pitch, our conversations are like -- "whenever I get the ball, I'll pass it to you. If you are getting a chance try finishing it. If you have the ball, I will always support you."

And, off the field also, we stay like brothers.

14. Mumbai City FC is at the top of the table now. Do you think they can go all the way to lift the title?

15. What is your favorite footballing moment till now?

BS: My favorite moment is my free-kick goal against FC Pune City in 2017. Well, that was my first ever goal of the ISL, and I guess that was the first goal scored by any Indian in that season.

16. Last question, any message for the upcoming footballers.

BS: Keep working hard, improve day-by-day, you will definitely get your chance to play at the professional level one day.