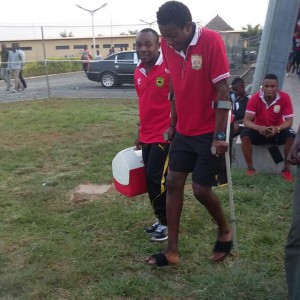 Asante Kotoko agile shot stopper Felix Annan has revealed that he thought he had broken his leg when he clashed with WAFA’s Charles Boateng in their opening fixture in the Ghana Premier League.

Annan came out worse when he collided with Boateng in the 21st minute mark after he was stretched off due to the pain the 22-year old goalkeeper was going through. However, with barely a week after the incident, Annan has revealed that he thought his leg has broken just after the incident.

“I first thought I had broken my leg due to the pain I felt in my knee. Thank God that was not the situation, “Annan recounted.

Annan is expected to be at the sidelines for a month.