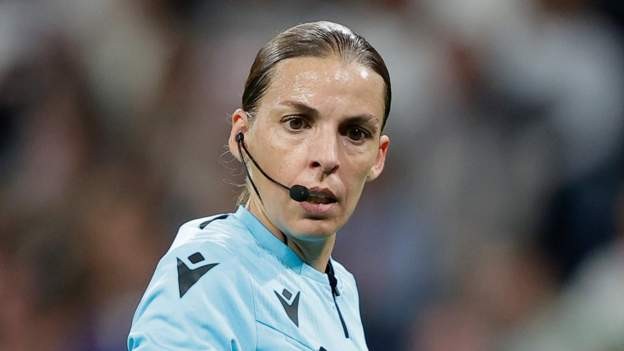 Having female referees at the World Cup helps send a positive message over women's rights in Qatar, says Stephanie Frappart.

The 38-year-old Frenchwoman will be the first woman to referee at a men's World Cup in Thursday's group-stage game between Costa Rica and Germany.

Frappart will be joined by assistant referees, Brazil's Neuza Back and Mexican Karen Diaz Medina, at Al Bayt Stadium, in an an all-female on-field refereeing team.

She is one of three female officials picked to take part in the tournament, the first time it has happened in a men's World Cup.

Rwandan Salima Mukansanga and Yoshimi Yamashita of Japan are the other two women referees to be chosen.

"We know there are some difficulties there for women," Frappart said.

"But I think and I hope that this World Cup will help them.

"I have always been made welcome [in Qatar], so there is no problem. I am not afraid to go there, but I hope this World Cup will help them in the future."

The Gulf state, which follows strict Muslim laws, has been widely criticised for its ban on same-sex relationships and its treatment of migrant workers.

England women's captain Leah Williamson has said she hadn't "got any interest" in watching the tournament and team-mate Beth Mead said it was "disappointing" the World Cup was being held in Qatar.

However, Frappart said she could not turn down the opportunity to officiate at a men's World Cup.

"When you are selected for the World Cup, how can we say we will not be going?" added Frappart.

"The men's World Cup is the most important competition in the world, not only in football."

In total there are 36 referees selected for the 2022 World Cup.

Frappart was the first female official to referee a Ligue 1 game in 2019 and then, in 2020, a men's Champions League match.

She was also the first woman to referee the French Cup final in the summer and also broke new ground when she officiated at the men's Euro 2020.

On looking forward to the tournament she said: "There is always pressure in the matches. And when you are a woman there is more pressure because it is always new.

"We know the pressure. But I think we will not change ourselves - be calm, focused, concentrate. And don't think about the media and everything and be focused on the field."

Frappart knows from previous experience that she and her other female colleagues are well-equipped to deal with the pressures.

"We know there is a lot of expectation, we know that each game is more important, but we also have experience in our competition," she added.

"I made a lot of games with high importance, so with all this experience we will be ready for the matches."