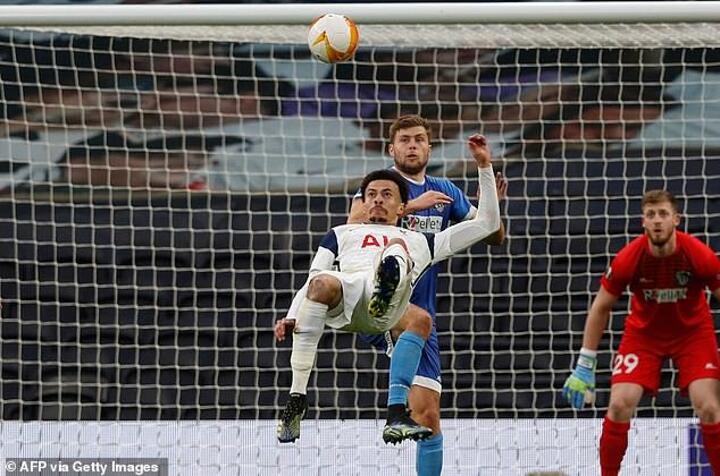 Rio Ferdinand says Dele Alli has 'put himself in the shop window' after the Tottenham star stole the show in a 4-0 victory over Wolfsberger.

Alli was given a rare start for the Europa League tie and made the most out of it, scoring a wonderful overhead kick to give Jose Mourinho's side the lead.

The 24-year-old then provided assists to Carlos Vinicius and Gareth Bale as Spurs romped to an 8-1 aggregate victory to advance to the last 16 of the competition.

After the game, BT Sport pundit Rio Ferdinand said: 'He's been waiting for that and Dele has put himself in the shop window.'

Peter Crouch who was at the ground for the game said people 'can't get too carried away' because of the quality of the opponents, but that Alli had a 'bit of a swagger back'.

He said: What I saw from Dele today was magnificent. You can only beat what's in front of you and I thought he was first-class and had a bit of a swagger back.

'He set-up two goals and scored an absolute worldie, you can't ask for more really.

'I don't know what's going on this season but for him to have been left out of nine squads, not even making the bench.

'We know he's got ability and tonight he's proved that. These (Wolfsberger) aren't great but he was magnificent. He was involved in everything good Spurs did.'

After making 25 appearances in the Premier League last season, the Englishman has made just five so far this season.

There had been speculation that he could have looked to leave the club in January, in an attempt to bolster his chances of making England's Euro 2020 squad.

Despite links speculating he could move to Paris Saint-Germain, Alli remained at the club despite rarely featuring.

Crouch added that Alli's performance against Wolfsberger proves 'you can't rule him out' of the Tottenham squad.

He said: 'It's been a really difficult time for him. Bursting onto the scene at what 18 years old and was incredible. And yeah he's found it difficult as of late, the manager's not been playing him.

'It's difficult not to get carried away because of the team they're facing. There will be much better opposition in the Premier League.

'But when you've got Alli performing to this level, Gareth Bale seems to be coming to the forefront of it, Kane and Son have been on fire this season.

When you get those four in the team and they're firing on all cylinders, Tottenham are going to be a real threat and it does feel that they are maybe coming back to it.

'The question is does Jose want to get Alli in the team? On tonight's showing you can't rule him out.'