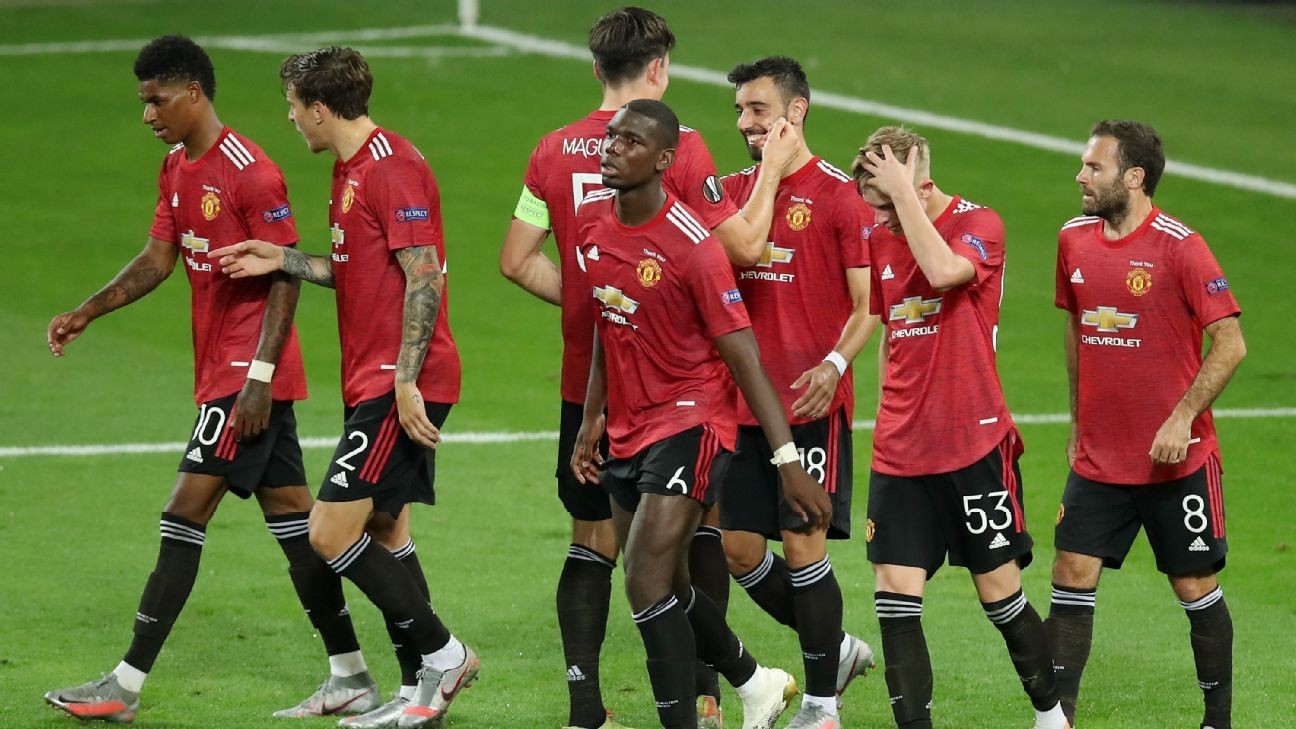 Manchester United scraped through to the semifinals of the UEFA Europa League after a narrow 1-0 win over FC Copenhagen in Cologne on Monday. The back-and-forth game went from being hard to watch to having a relentless pace, but after all was said and done, it ended how many games involving the Red Devils have during the campaign: a controversial Bruno Fernandes penalty won the day for Solskjaer's men.

Some of the one-touch passing from United was exemplary to the point where they were, at times, running circles around their Danish counterparts. They were much more effective when keeping the ball on the deck with an incredibly quick pace to their play, and as the game went on there was a natural increase to their output up top -- as well as their tendency to switch the ball from side to side.

The favourites' defending was fairly shoddy. They gave Copenhagen far too much space, multiple players were being drawn to the ball at any one time and they didn't really seem to respect their opponents' firepower. They didn't concede a single shot on target, but against better opposition, United would've been punished.

6 -- While Ole Gunnar Solskjaer did put forward an attacking lineup, it never really felt as if he had any urgency to make the necessary changes. He left it until just after the hour mark to change things up with a few safe but smart substitutions, and in addition to looking fairly uninspired on the touchline, he was clearly relying too heavily on the prospect of extra time. You could also argue Fernandes should've been taken off as opposed to Fred.

GK Sergio Romero, 7 -- It was a fairly quiet day at the office for the backup keeper, although many will agree that he was the right choice to start ahead of David De Gea as he looked pretty calm when called upon.

DF Aaron Wan-Bissaka, 5 -- The highlight: a vital block in the 65th minute. The lowlights: lethargic deliveries, losing out in one-on-one battles and being dispossessed on several occasions.

DF Eric Bailly, 6 -- When he was required to make a last-ditch challenge he was there to save the day, but when he's given time to make a decision, he has no real awareness on or off the ball.

DF Harry Maguire, 5 -- The Englishman looked more composed than some of his teammates, but his slow tempo and long searching balls felt far too repetitive.

DF Brandon Williams, 6 -- The youngster set the stage for a mixed showing with an important clearance in the 15th minute after a few nervy encounters down the wing. All in all, though, he showed glimpses of why he's such a promising talent.

MF Paul Pogba, 6 -- Looked great in the air and his defensive work was admirable, but as the second half drew on, he disappeared as a valid attacking threat.

MF Fred, 7 -- He needs to work on holding his position and he nearly cost United early on, but his determination and ability to carry the ball forward was a big asset for them.

MF Bruno Fernandes, 7 -- After a string of lapses in concentration, the popular midfielder made amends with a powerful penalty in extra time.

Manchester United moved on to the Europa League semifinals with their win over Copenhagen. Getty

FW Mason Greenwood, 6 -- He may panic on the ball every now and then, but the teenager proved his worth as a finisher after a goal ruled out by VAR and a delightful strike that rattled the post.

FW Marcus Rashford, 4 -- It was an uncharacteristically poor showing from Rashford after some lacklustre touches and no real Plan B when he was stood up by a defender.

FW Anthony Martial, 6 -- Didn't appear to be at the races after regularly miscontrolling passes and failing to bring others into the game, but he came into his own late on with some nice runs and efforts before winning the penalty that led to Fernandes' goal.

DF Victor Lindelof, 6 -- Seemed steady enough but felt like he was being used as a set of fresh legs with extra time looking likely. Probably should've made it 2-0 just before half-time in extra time.

MF Nemanja Matic, 7 -- He kept things ticking along in the middle of the park but there was definitely a negative element to his play, and he had more than a few sloppy moments in extra time.

MF Juan Mata, 6 -- Looked lively upon being introduced and was unlucky not to find the back of the net.

MF Scott McTominay, N/R -- Quite literally the definition of a "killing the clock" substitution.

FW Jesse Lingard, N/R -- Had a nice one-man breakaway that could've put an end to the tie as a contest but just couldn't finish it off.