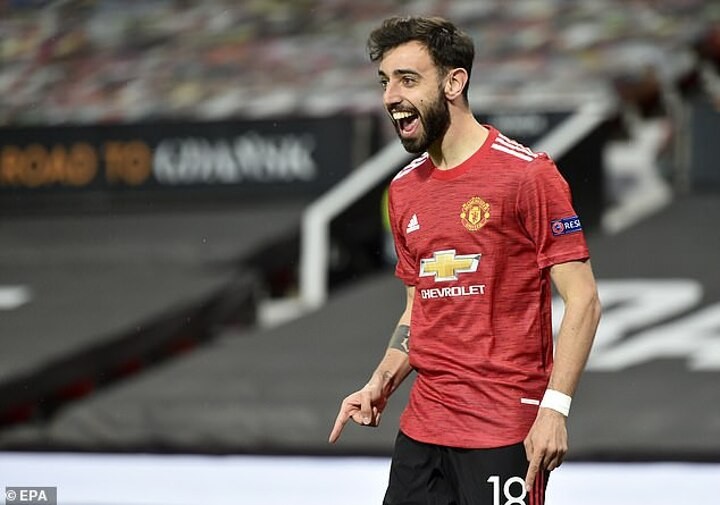 Manchester United talisman Bruno Fernandes has again been lauded by pundits after playing a starring role in leading the club to the cusp of success this season.

Fernandes has scored 16 goals in all competitions and been ever-present for a United team on course for their first trophy since 2017 with the Europa League final to come in Gdansk later this month.

And ahead of United's trip to Aston Villa, Sky Sports' experts waxed lyrical when highlighting Fernandes' relentless work ethic and sheer will to win.

Troy Deeney, who came up against Fernandes last campaign with Watford, named the Portuguese playmaker as the main reason behind United's climb up the table.

'The team has moved forward. Bruno has been massively effective for them,' Deeney said. 'He's the kind of person that just drives the whole team with his work ethic and desire to win.

'I've watched games when they're two, three nil up and he's still trying to drive people forward and get more goals. They're growing, they're not playing great stuff but they're certainly effective and they're winning great games.'

Paul Pogba is currently in the midst a rich vein of form after returning to the side - and the midfielder is widely believed to be the star name under Ole Gunnar Solskjaer alongside Fernandes.

With both players forming a formidable connection, experienced frontman Deeney believes that Fernandes has helped to inspire his mercurial team-mate to reach greater heights.

'With Fernandes, he now makes Pogba play better as well,' Deeney added. 'Pogba's got somebody that he sees and respects, in terms of quality. He puts him on the same level as himself. When he's driving, he makes Pogba do that as well.'

Fernandes is yet to taste defeat on the road in the top-flight, a remarkable run that stretches back to his unveiling in January 2020, and former Manchester City defender Joleon Lescott also gave him a glowing reference.

'Remarkable stat to do that,' Lescott said. 'I think having no fans has helped. You can't take away his impact and what he's done for the club.

Fernandes' spectacular form away from home was placed at risk, however, after Bertrand Traore's stunning goal saw United trailing at the break at Villa Park.

Meanwhile, Fernandes, despite the regular praise directed at him, was quick to speak highly of one of United's other key players, Edinson Cavani.

Cavani has netted 12 goals this season after joining on a free transfer and looks as though he will commit to spending a second term at Old Trafford.

'The mentality is passing to us and he has to keep passing it to us because he has the right mentality to be a champion and we have to learn from that,' Fernandes said.

'Everyone can see his technical qualities because he made history everywhere else he's played and nobody can delete history.'