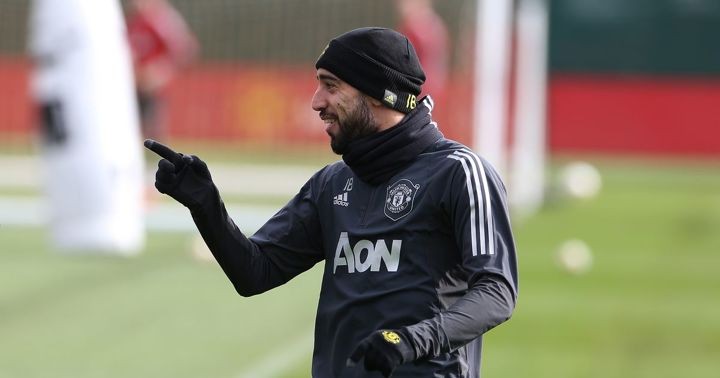 Bruno Fernandes has selected the Manchester United match in which he scored his first goal for the club as the performance he would love to relive.

The Portuguese playmaker did a Q&A session with the official United website and chose the 3-0 win over Watford in February - in which Fernandes opened the scoring from the penalty spot - because of the atmosphere at Old Trafford.

Fernandes has so far justified the £47million fee that United paid to Sporting Lisbon in January to sign him, scoring three goals and laying on four assists in his nine appearances for Ole Gunnar Solskjaer's side to date.

And it all started in that Watford game.

Fernandes said: “The game I would like to watch would be the game where I scored my first goal, against Watford, because I want to feel – not exactly how I would feel in the game – but I can feel the game, the atmosphere and everything when I score. I can have the motivation to keep training and keep the focus on the return of the game."

Fernandes added that the United game from history he would most like to relive would be one in which his compatriot Cristiano Ronaldo featured heavily in.

"I think from history I have maybe one game – the Champions League final when Cristiano scores with the header," Fernandes added. "After this, he misses a penalty, I think it's the same one right, against Chelsea? This one.

"I think it was a great final and for Cristiano it was one of the best games yet. Because he scored an amazing goal with a header. He doesn't jump, he flies.

The challenge for the 25-year-old and his United teammates is now to get back up to speed after the squad returned to training last week.

All training and matches had been shut down due to the coronavirus pandemic, but the Premier League is edging closer to a return and Fernandes spoke about how he's remained motivated during lockdown.

He added: “Physically it's easier than mentally, because you just need to follow the programme and you will be okay. Mentally it is also nice because I have my family with me so you can spend a lot of time with the family. I have my baby so I have a lot of time to be with her.

"Normally, if I have games and training, for most of the time I'm out sleeping in hotels and everything, so I don't have the same time to be with her. So it's nice to have this time.

"Obviously, it's a lot of time and sometimes we don't know how we can be active with her, because she has a lot of energy – more than me! So you need to play a lot with her [and do] different things.”