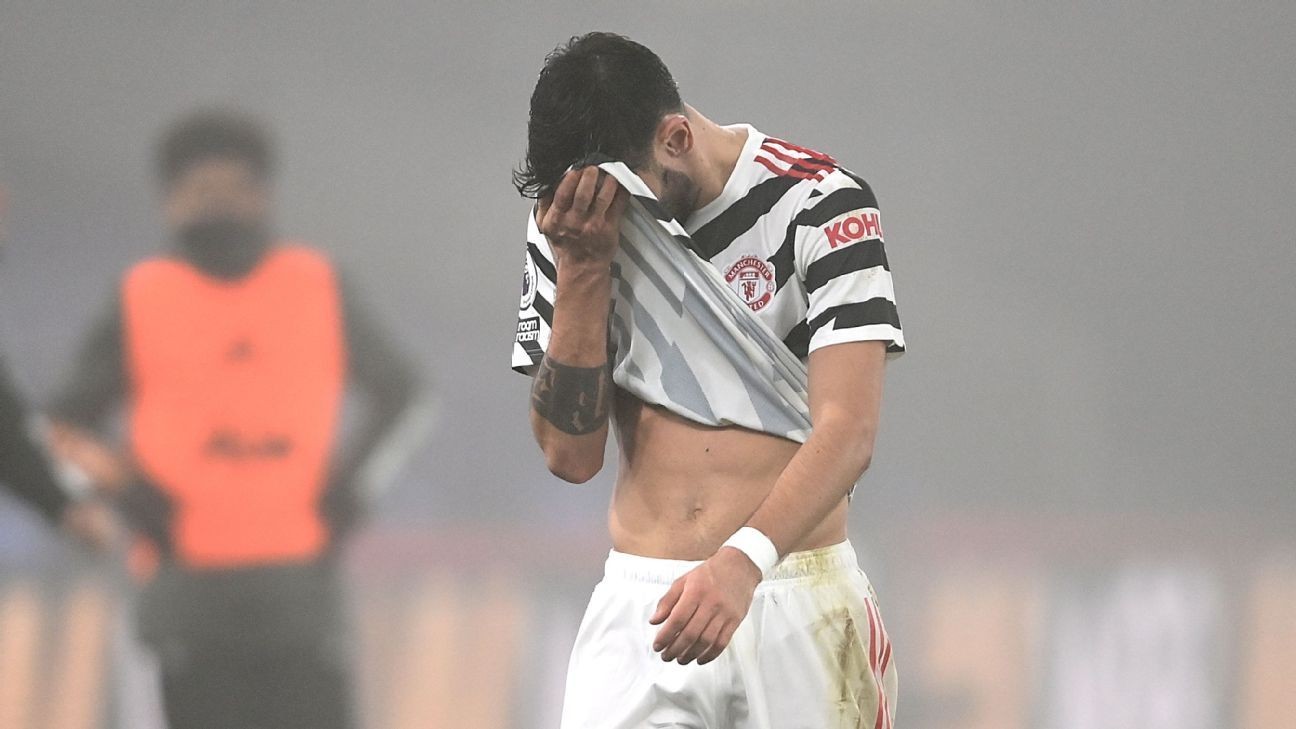 LONDON -- COVID-19 will bring perennial club-vs.-country arguments into sharper focus this month, but the footballing reasons are stacking up for Manchester United to engineer a break for Bruno Fernandes.

A third consecutive 0-0 draw across all competitions, this time against Crystal Palace, leaves Ole Gunnar Solskjaer's side 14 points behind runaway leaders Manchester City with Sunday's derby at the Etihad Stadium to come. Solskjaer claimed on Feb. 6 when throwing away a 3-1 lead to draw 3-3 at home to Everton that United "should not even be considered as title chasers," and that statement has become a self-fulfilling prophecy during a run of turgid football that bears a strong resemblance to a lot of their football prior to Fernandes' arrival from Sporting Lisbon in January 2020.

A thick layer of fog gradually enveloped Selhurst Park as the weather did its best to prevent anyone seeing just how badly United were labouring, bereft of the spark Fernandes so often provides.

He had 40 goal involvements -- 23 goals and 17 assists -- from 40 Premier League matches prior to Wednesday, a measure of the staggering impact he has made, single-handedly dragging them into the top four last season and threatening, briefly, to reach even loftier aims this time around. But there have been palpable signs of fatigue of late and even in games where he has found the scoresheet, it has masked a decline in his general play, giving the ball away an alarming amount -- a willingness to take risk that has shifted from calculated and creative to almost a series of Hail Marys.

United had 63% possession here and registered one shot on target. Fernandes conceded possession 10 times, a figure only beaten by Luke Shaw (22) as United were either too slow or wasteful to make their territorial domination count. Fernandes is so often relied upon to inject that dynamism but, deployed further forward as a more orthodox No. 10 here compared to Sunday's stalemate at Chelsea, he was lacklustre.

United's fixture list is unrelenting. After City, there are two Europa League last-16 legs against AC Milan with high-flying West Ham United in between and Leicester City to follow.

Then comes the international break.

Current quarantine rules mean anyone playing in one of 33 countries on a "red list" would have to self-isolate for 10 days upon their return to the United Kingdom. Portugal is on that list, and they are scheduled to play three World Cup qualifiers at the end of this month: Azerbaijan and Luxembourg at home, Serbia away.

Fernandes would potentially miss a league game against Brighton & Hove Albion and a Europa League quarterfinal first leg that would of course be a breather in itself, but FIFA have given clubs the power to withhold players from international duty in the circumstances and it seems highly likely United will look to use it.

"We've not sat down and made a proper call on that one but it doesn't make sense if you lose your player for 10 days isolation, of course it doesn't," Solskjaer said after the match. "We're the ones paying the players and from what I understand FIFA have given the rules that they don't have to be released. So I would think that's going to be a hard call to make to let them go and play in red-list countries, yeah.

"I want Bruno, of course, ready against Brighton and hopefully that we are through in Europe and against Tottenham after that break, of course I do."

Fernandes was not alone in underperforming. Goalkeeper Dean Henderson, deputising for David De Gea after the Spaniard missed the game due to what Solskjaer described as a "private matter," could be heard shouting "quicker, quicker" as United struggled to move through the gears.

Marcus Rashford continues to look similarly jaded. The 23-year-old has just two league goals to his name in 2021 and never looked like adding to it, showing his frustration during a second-half exchange with Harry Maguire that featured the United captain telling him to "get f---ing back onside quicker" as the visitors tried to rouse themselves.

Klopp, Solskjaer question players at WC qualifiersSolskjaer: Man Utd must be 'realistic' with cashHow to catch Man City? A way-too-early look at how Premier League rivals can be ready next season

Edinson Cavani at least looked sharp early on with his movement helping United build from the back but he faded in influence, presumably as a lack of match fitness after missing four matches with a muscular problem, to join Mason Greenwood who occupied that status all evening.

Palace were typically well organised and could even have snatched it at the end, Henderson saving well from Patrick van Aanholt.

"It has been a week with no goals and sometimes three goals sounds like a lot without scoring," said Solskjaer. "A week in a season like this, sometimes you don't hit the form you've had for many, many months. It is a bit of a worry, of course it is, but I know the boys are giving everything. That's the thing. We play every three days and I know they are giving everything they've got. Attitude and approach I am very happy with. The quality, we need to get back to what we know we can do."

The ball ended at Fernandes' feet just inside the Palace half close to the dugouts as referee Andre Marriner blew the full-time whistle. He thought for a second before top-poking it at the advertising hoardings and trudging off in isolation, shaking his head rather than shaking hands with anyone. The cracks are showing.

Still, it's only City next.