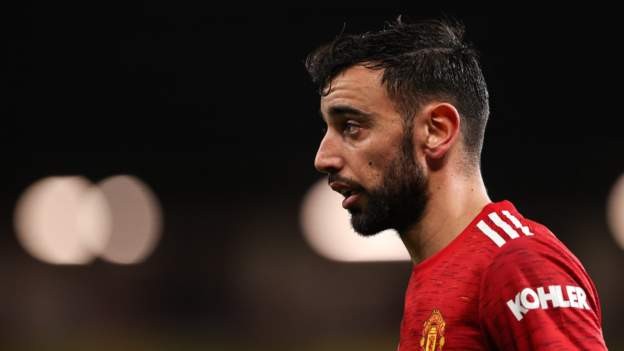 Bruno Fernandes wants to give Manchester United fans some "fun" by helping the club extend their title-winning lead over Liverpool.

Sunday's eagerly anticipated Anfield tie is between England's two most successful sides - with United having won a record 20 English top-flight titles to Liverpool's 19.

United are top of the table, three points above Liverpool in second.

"You don't want your rivals at the same level as you," Fernandes said.

The Portuguese midfielder added: "For the fans, the next day, going to talk to their friends who may be Liverpool fans it'll be much better if they've been the winner rather than the loser.

"And it would be a lot more fun with 21 titles and Liverpool still on 19."

Title chases involving both sides have rarely gone to the wire. When Sir Alex Ferguson went on his championship-winning spree with United, securing 13 titles between 1992 and 2013, Liverpool were only runners-up once, while United only managed it twice when the Merseyside club dominated the English game by claiming 11 championships between 1972 and 1990.

There will be no supporters to generate the kind of white-hot atmosphere associated with these meetings, but Fernandes, 26, who arrived at Old Trafford after both matches between the clubs had been played last season, is aware of what the intense rivalry means to the fans.

"Of course I know," he said. "Everyone knows. You don't want your rivals at the same level as you, or with the same amount of trophies as you

"For us, every game has to mean the same but for the fans it is different."

When the sides last met 12 months ago, Liverpool won 2-0 and the defeat that immediately followed, at home to Burnley, left United 30 points adrift of the eventual champions, having played two more games.

While it is simplistic to put United's stunning form reversal entirely down to Fernandes, he arrived at the club from Sporting Lisbon immediately after the Burnley game.

Since then United have won more Premier League points - 68 - than any other team, with Liverpool in second on 62.

Fernandes has won four of the seven Premier League player of the month awards he has been eligible for, putting him equal with Thierry Henry, Alan Shearer and Cristiano Ronaldo, among others, in sixth on the all-time list of multiple winners.

"It is not about me," he said. "I've come to a club that is very demanding.

"It is one of the biggest clubs in the world, a club that has won everything. I don't think it was me changing the mindset of the club.

"But I don't think it was me changing anything for the club because playing for Manchester United means playing with pressure and responsibility."

'I always felt we had to beat Liverpool to win anything'

Sir Alex Ferguson says Liverpool's performances over the past few seasons make him glad he has retired.

Ferguson won 13 Premier League titles after famously stating his intention to "knock Liverpool off their perch".

That took United's overall tally to 20 compared to Liverpool's 18.

However, as United have struggled since the Scot's departure in 2013, so Liverpool have returned to prominence, reaching two Champions League finals and last season, ending their 30-year wait for title number 19 as Klopp's side dominated.

In a good natured exchange with Dalglish and Klopp before Sunday's meeting (kick-off 16:30 GMT), Ferguson said: "There are a lot of derbies but Manchester United and Liverpool is always the game of the season.

"I always felt we had to beat Liverpool to win anything.

"But when I see Liverpool's performances over the past few seasons, I think to myself 'thank goodness I have retired'."