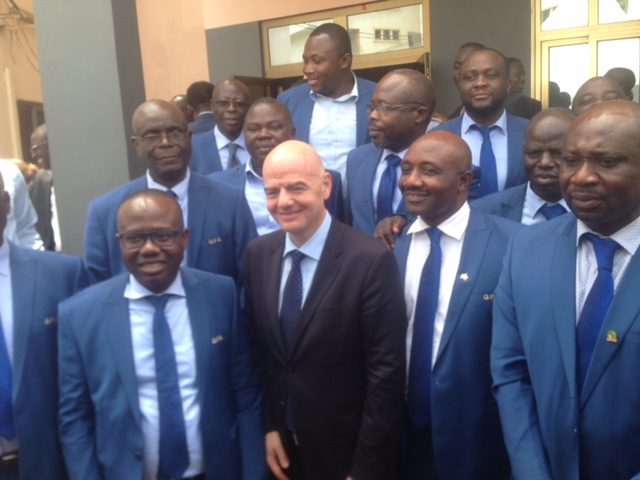 FIFA boss Gianni Infantino has assured Africa of at least seven places in at the World Cup when the global tournament is expanded to 48 countries from 2026.

The Swiss national revealed that the number to be allocated to Africa could still rise depending on the agreement from the FIFA Council.

Africa football leaders who met FIFA executives in Johannesburg last week asked the governing body to double the number of places it has when the World Cup is expanded.

The African leaders demanded at least 10 spots in the 48-team World Cup that Infantino has proposed from 2026 as the continent gave a ringing endorsement to the expansion plans.

Citing Ghana's current tight qualification group for the 2018 World Cup that includes Egypt, Uganda and Congo, the FIFA boss said it made sense for the competition to be expanded.

However Infantino said he will guarantee Africa of least seven places and that number could be increased depending on the decision to be made by the FIFA Council.

"Africa will have seven or more countries in the FIFA World Cup due to the FIFA Council’s confirmation of 48 countries which will participate the tournament," Infantino told a press conference in Accra on Monday.

Europe is seeking a minimum of 16 places, up from 13, and wants its sides to be separated in the 16 opening round groups of three teams, with the top two advancing to a 32-team knockout phase under plans approved by FIFA last month.

Asia are expected to get eight to nine places, compared to 4-1/2 now, and South America, which has 10 member countries, a total of six, also up from 4-1/2.

The CONCACAF region, made up of the Caribbean, Central and North American countries, would get 6-1/2 places, compared to 3-1/2, with Oceania, the small Pacific Islands confederation, having one automatic place at the finals instead of 1/2.

Inter-continental playoffs between countries with 1/2 a place would determine the additional spots at the finals.

The final allocation of places must be passed by the FIFA Council.

According to Fifa research, revenue is predicted to increase to £5.29bn for a 48-team tournament, giving a potential profit rise of £521m.

An initial stage of 16 groups of three teams will precede a knockout stage for the remaining 32 with the change coming in for the 2026 tournament.

The number of tournament matches will rise to 80, from 64, but the eventual winners will still play only seven games.

The tournament will be completed within 32 days - a measure to appease powerful European clubs, who objected to reform because of a crowded international schedule.

The changes mark the first World Cup expansion since 1998.