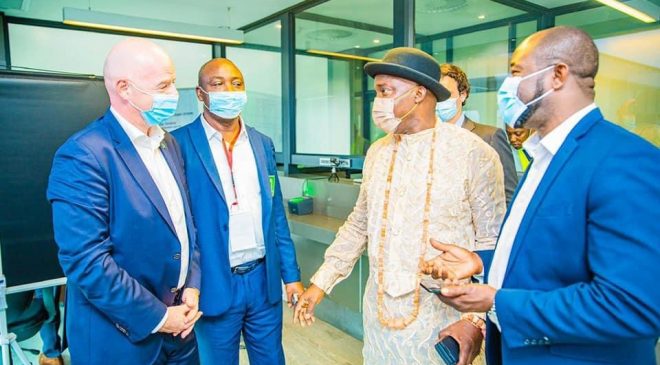 Kurt Okraku and other top football officials including Pinnick
Share

A leading member of the FIFA Council, Amaju Pinnick, says the future of Ghana football is bright under the leadership of Kurt Okraku insisting the key stakeholders must continue to lend the necessary support to the Ghana Football Association (GFA) to help the country to return to the top of world football.

The representative of the Anglophone countries on the FIFA Council launched the passionate defence of the GFA President in the wake of the attacks following the Black Stars group phase exit from the ongoing African Cup of Nations in Cameroon.

The Nigerian national expressed worries over two press statements from the Ministry of Youth and Sports of Ghana in the wake of the Black Stars unimpressive showing following their group phase exit exacerbated by the defeat at the hands of the lowly Comoros Island.

Pinnick, who is also the President of the Nigerian Football Federation (NFF), will be travelling to Ghana next month on an official visit to meet with key stakeholders as he seeks to engage them to help further stabilise the federation that recently came out of a period of normalisation.

The top football administrator says the GFA must not be judged by the performance of the Black Stars at the ongoing Africa Cup of Nations in Cameroon revealing that the new initiatives being undertaken under the new leadership of  Okraku has received overwhelming praise from his peers on the continent.

Pinnick revealed that Okraku commands 'big respect' among his peers on the African football continent which resulted in the decision of making him the President of WAFU B which points to the fact there is trust in the Ghanaian's ability to send Ghana back to the top of world football.

"We have read various media reports of statements by the ministry and if it is true, I would urge patience in the way these things have been done. There should be cooperation among the stakeholders and mutual respect among them for the betterment of Ghana football," Pinnick said on the sidelines of the 2022 World Cup playoff draw in Douala on Saturday.

"Football results are difficult to take in all aspects - from the ministry, the FA and the Ghanaian public but the key thing is that we must all come from the same page to help fix whatever went wrong and to continue to improve. We must never give an image of friction or conflict.

"As the representative of the Anglophones on the FIFA Council, I will be travelling to Ghana after the AFCON to meet with the stakeholders to help smoothen relationships and listen to concerns so we can find last solutions if there are any problems.

"We as African FA President and all our peers at CAF and FIFA have a big respect for Kurt for the work he is doing in Ghana. Ghana is a very important member of the African football family that needs all the stability after just coming out of Normalisation.

"The work Kurt has done from the grassroots level, to the domestic leagues and women's football in just two years is admirable that's why we all respect him and expect very big things of him. It is for this reason that we all agreed to make him the President of Wafu B because we have seen his qualities and know he will help to take Ghana football back to the top of world football again.

"Please let's not rock the boat. Let all the stakeholders in Ghana work together and let's all help to take Ghana football back to where it belongs with Kurt as the leader of the GFA."

The GFA has been under pressure since the Black Stars crashed out of the AFCON with the Sports Ministry calling for the sacking of coach Milovan Rajevac and his backroom staff.

The four-time champions were eliminated in the group stage at the African Cup of Nations with a 3-2 loss to tournament debutant Comoros in a shocker that eclipsed a series of big surprises already in Cameroon.

In a tumultuous game, Ghana fell behind in the fourth minute, had captain Andre Ayew harshly sent off in the 25th and was 2-0 down in the 61st.

The Ghanaians leveled with two goals in 13 minutes late in the game, only to concede again when Ahmed Mogni swept in his second in the 85th minute to give Comoros undoubtedly its biggest soccer moment ever

The killer blow for Ghana came with Ayew's red card. He slid in when Comoros goalkeeper Salim Ben Boina spilled the ball and did get a toe to the ball, but also sent his boot crashing into the keeper in his follow-through.