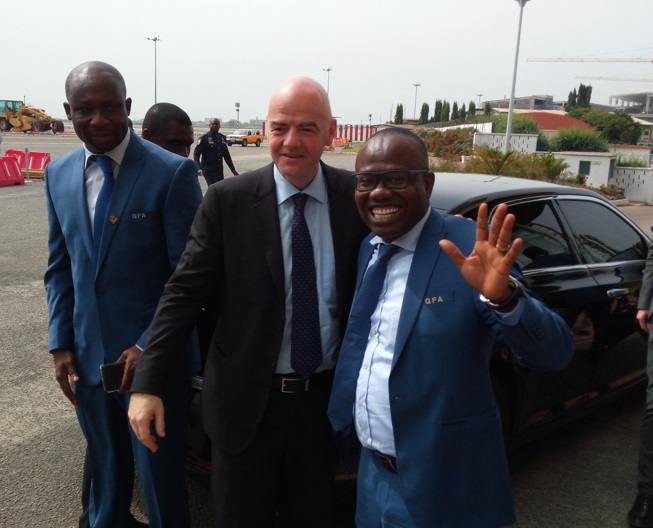 Fifa president Gianni Infantino has rebuffed claims that he is seeking to influence the outcome of next month's Confederation of African Football presidential elections.

The leader of FIFA stated this during his visit to Ghana on Monday after some African football observers claimed he was seeking to influence the outcome in favour of Ahmad Ahmad.

Infantino's comments come after he attended a party on Thursday hosted by the chairman of the Council of Southern African Football Associations, which has endorsed Caf candidate Ahmad Ahmad.

His travel to several African countries since then has also heightened suggestions that Infantino is seeking get Hayatou out of office.

Infantino insists his visits to the African countries like Zimbabe is meant to shore up football development and not to meddle in African football election politics.

"I am the President of 211 associations in the world and I have got the duty to visit and see for myself the job they are doing locally.

"It is not up to the FIFA President to comment about CAF elections. Delegates have the rights to exercise their rights democratically to elect their leader."

Cosafa chairman Phillip Chiyangwa - also the chief of the Zimbabwe Football Association - held the event in Harare to celebrate his birthday.

He also invited other African FA chairmen from outside the Cosafa region.

Before the event took place Caf, in a letter sent on behalf of Hayatou, accused Chiyangwa of "trying to destabilise" the continent's governing body and warned he could face sanctions.

Hayatou is attempting to win an eighth term in office in the elections on 16 March.