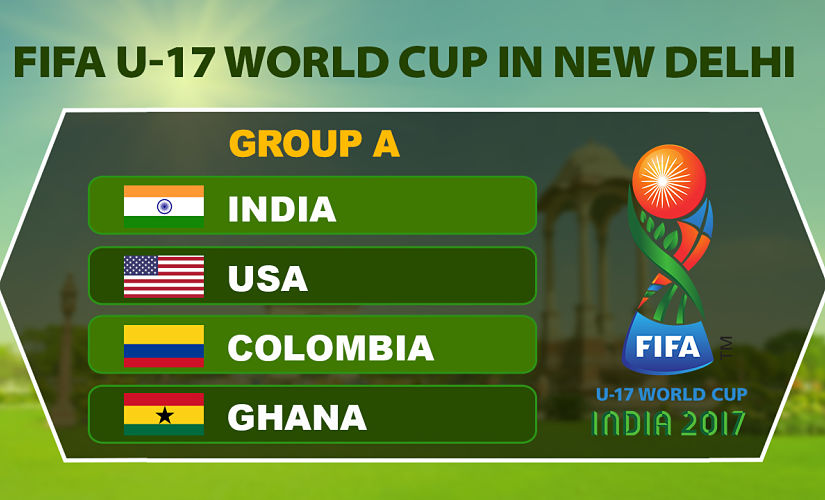 So, here it is then. Less than four years after FIFA decided to award India the right to host the Under-17 tournament, the country will make their World Cup debut.

It is a truly momentous occasion for Indian football.

The poverty of achievements on the international stage will mean that the mere act of playing in a World Cup will be a remarkable thing in itself.

India are, by all accounts, in a tough Group A alongside Colombia, Ghana and the USA.

“We've been handed a very tough group. We're up against the sort of sides who need no introduction, but we're ready.”

These words were uttered by Ghana’s coach Paa Kwesi Fabin but they could have easily come from any of the other coaches who find themselves in Group A.

India will certainly have an acute sense of what lies in wait. Portuguese manager Luis Norton de Matos — whose great grandfather was born in Goa — has been in charge of the team for about seven months now and, despite the odd encouraging result in friendlies, he knows where his team stands.

India would have been the weakest team in any group but this combination does the hosts no favours.

The lid on optimism, thankfully, has not been removed. When India will open their campaign against the USA on Friday, one will get a chance to assess whether the work over the past three years has achieved piecemeal gains or not.

Tours to 13 countries for 60-plus friendly matches, in addition to competitive games on the continental stage, has been the All India Football Federation’s strategy to ensure the side is well-drilled for the showpiece event.

In preparation for the World Cup, India played six of the national sides who have qualified for the tournament.

For Matos’ team, the intention is to be competitive and take it from there.

To achieve that, the Portuguese coach wants his side to compress space between midfield and defence while hoping to hit opponents on the counter.

This marks a departure from the open, attacking football espoused by Matos’ predecessor Nicolai Adam.

However, after the German was sacked in controversial circumstances, India does seem to have adopted a strategy that is more in line with its capabilities.

Of course, playing a competitive game in front of multitudes will be an experience which has remained alien to this Indian side.

Until the moment arrives, one cannot express confidence in the team’s ability to not get overawed by the occasion.

But any point gained will be a considerable achievement and if India does rise to the occasion, it will be interesting to see whether home fans can carry them through.

A place in the next round, though, will be a miracle. India have progressed to the knockout stage in the AFC Under-16 Championship only once in seven attempts.

The country is not just a minnow on the world scene; they also hold little influence on the continent.

To expect this side to win matches against teams which have been historically competitive is an exercise in foolhardiness.

Miracles happen but anybody calling for restrained optimism is aware of the world they inhabit.

Key Players: For offensive effervescence, striker Aniket Jadhav and winger Komal Thatal will be relied upon. It will also help that right-back Boris Singh Thangjam enjoys powering forward. Much depends on men in central areas of the pitch as they will be expected to press and compress appropriately, with skipper Amarjit Singh Kiyam and Suresh Singh Wangjam providing the backbone.

The Indian journey will begin against USA, which will make their 16th appearance in the under-17 World Cup – a record they share with Brazil. Although the Americans once finished fourth (1999), they hold the record for the most defeats (28) and conceding the most number of goals (96) in the tournament’s history. An impressive qualifying campaign though, at the CONCACAF Under-17 Championships in Panama this year, is a more reliable indicator of form. USA won every game before losing to Mexico in the final on penalties. But the Americans did break their arch rival’s 25-match unbeaten streak earlier in the tournament thanks to a group stage win.

Managed by John Hackworth, who has been in charge for nearly two years now, USA are a real contender for a place in the last-16.

Previous U-17 World Cup record: USA’s best display arrived in 1999, when they finished fourth after a defeat on penalties in the semi-final to Australia.

Key player: Paris Saint-Germain’s Timothy Weah can boast of a rich football heritage. He’s the son of Liberian legend and 1995 Ballon D’Or George Weah. Josh Sargent is another name worth remembering. The forward was USA's top scorer in the continental championship with five goals. Sargent is set to join the German club Werder Bremen next January.

Colombia, which returns after eight years, will not provide much respite to India either despite their iffy form during the Under-17 South American Championship - only three wins out of eight were good enough for a third-place finish.

If the friendly Colombia played against Minerva Punjab last week is a fair indicator, the South American side relies heavily on wide areas with its players aiming to make their physical presence count. One would expect manager Orlando Restrepo to line the team up in a back four, with the choice very much open for fielding one or two strikers up front. The physical education trainer was appointed last August following a satisfying stint with Medellin-based Atletico Nacional’s Under-17 side.

Previous U-17 World Cup record: Like USA, Colombia’s best performance in the Under-17 World Cup is a fourth-place finish, which was achieved twice (2003, 2009).

Key players: Expect plenty of crosses, particularly from the 5'7-frame of Leandro Campaz. In fact Campaz, forward Santiago Barrero and midfielder Juan Penaloza scored nine of the 12 goals that the Colombians managed during the qualifying tournament.

India will finish their group engagements on 12 October versus Ghana. The two-time champions have qualified for the first time since 2007. Despite losing in the final to Mali at the Under-17 Africa Cup of Nations earlier this year, Paa Kwesi Fabin’s boys impressed as they became the first side from the continent to qualify for the World Cup. Ghana also finished as top scorer in the qualifying tournament. Fabin has been managing the side for six years now and his familiarity with youth football will come in handy.

The manager has already made changes to the team which achieved qualification as some of his better players missed the tournament in Gabon owing to injuries. There is an expectation that this Ghana side could end up at the business end of the World Cup. A training camp in the UAE preceded the team’s arrival in India.

Previous U-17 World Cup record: In the 1990s, the Black Starlets were veritable heavyweights as they reached four straight finals from 1991 to 1997, emerging victorious in the first and third of those tournaments. But Ghana managed to qualify for only two of the previous seven editions, although it did reach the semi-finals on their previous appearance a decade ago in South Korea.

Key players: Skipper Eric Ayiah finished as Ghana’s top goalscorer in the qualifying tournament with four strikes. Employed by the club Charity Stars, the striker wears the unusual number 6 as he shares his birth date (6 March, 2000) with his country’s day of independence.

Such is Ghana’s form and pedigree, it would not be a stretch to imagine Fabin’s boys as the group winners. USA and Colombia will also be in a close fight to finish as an automatic qualifier. As for India, it is time to hope against hope.