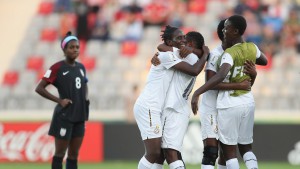 Ghana defied odds to beat favourites USA 2-1 to revive their campaign at the FIFA U17 Women's World Cup on Tuesday afternoon.

Captain Sandra Owusu-Ansah converted an 84th minute penalty to bag the points for the Black Maidens who returned to winning ways.

Frankie Tagliaferri shot the Americans into the lead on five minutes when he slotted past Kayza Massey in goal for the Maidens.

But the Evans Adotey's side never gave up and mounted a strong search for the equalizer but ended the first half trailing.

On the 63rd minute mark, Juliet Acheampong headed in a cross from the right at the near post after goalkeeper Laurel Ivory.

Six minutes away from full time, Ghana profited from a hand ball inside the box and Owusu Ansah elected herself to slot home.

The Black Maidens have three points from two matches and could advance from Group D with a draw against Paraguay in their final match.