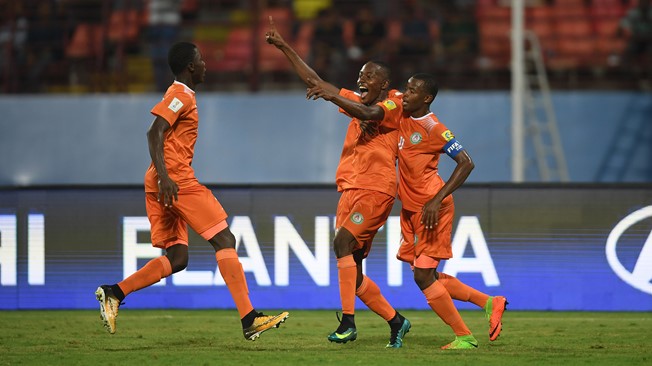 History was made in Kochi on Saturday evening as Niger made a winning debut in a FIFA competition with a 1-0 victory over Korea DPR in Group D at the FIFA U-17 World Cup India 2017.

Salim Abdourahmane was the hero with the only goal of the match.

It was Korea DPR, however, that had the better of the first-half exchanges at the Jawaharlal Nehru International Stadium. The closest the Asians went to scoring before the break was through captain Yun Min, as his long-range effort struck the Nigerien crossbar.

After the interval, it was the African debutants that looked more convincing as an attacking unit. This resulted in an historic moment just before the hour mark.

Some good work on the right flank by Habibou Sofiane allowed him to find an unmarked Abdourahmane in the Korea DPR box. With time to pick his spot, the Junior Menas striker slotted his shot past Young Chollima goalkeeper Sin Tae-Song for a 1-0 lead.

Abdourahmane proved a real handful for the Korea DPR defence and was unlucky not find the scoresheet again. He forced a good save from Sin before narrowly missing the target moments later.

In the end, the single goal was enough for Niger to claim a famous result.