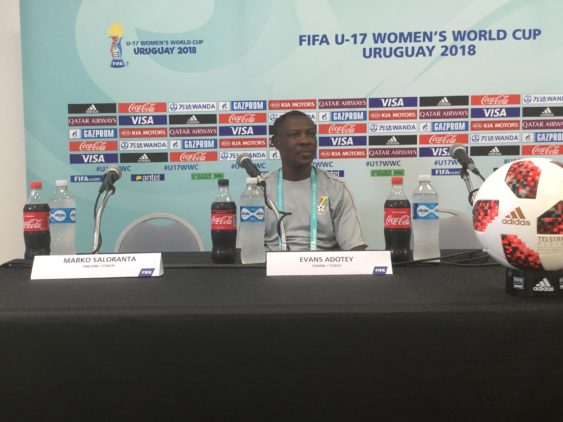 Head coach of the Black Maidens, Evans Adotey has credited his sides big win over Uruguay at the FIFA U-17 Women's World Cup to the tactical discipline of his team.

Ghana thumped hosts Uruguay 5-0 at the Estadio Charrua on Tuesday night to begin their campaign on a flying note.

Captain Abdulai Mukarama bagged a hat-trickk, with Milot Pokuaa and Fuseina Mumuni scoring the others.

After a dominant display by the Black Maidens, coach Evans Adotey insists his girls executed his game plan to perfection.

"It was a very good performance, we planned on attacking and defending as well so my tactics worked to perfection as I said earlier," he said in a post match interview.

Ghana will face Finland in the second game of the competition on Friday and coach Adotey, who is bent on qualifying from the group stage as earlier as possible, says the team will identify the weak spots from the game last night and correct them before the game against the Europeans.

"Well, we need to go back and then make corrections on what we saw wrong today and how we can improve on our tactics so the day will decide," he added.

Ghana sit top of group A after the win over Uruguay with New Zealand in second place after narrowly defeating Finland in the other game.