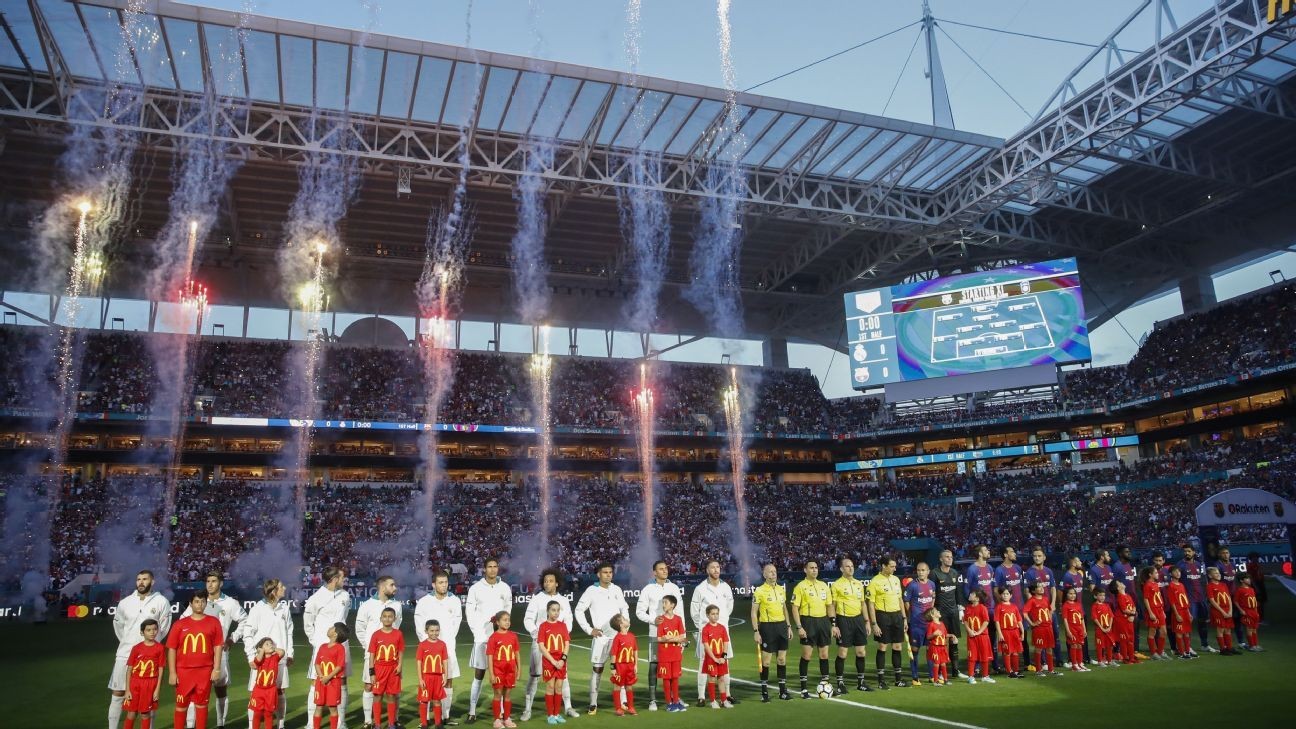 Barcelona and Real Madrid players are pictured ahead of a friendly Clasico matchup in Miami.

The FIFA Stakeholders Committee has recommended that football's governing body should formally prevent leagues from holding official matches outside of their home territories.

The committee released a statement after meeting on Thursday in Zurich, Switzerland, saying: "With regard to matches and competitions with an international dimension, the committee endorsed the principle set out by the FIFA Council that official domestic matches should take place on the territory of the member association concerned. Regulations on this matter will be submitted to the FIFA Council."

- When does the 2020 MLS season begin? All you need to know
- Stream MLS games LIVE on ESPN+

The move is in response to efforts by sports promoter Relevent Sports to hold a La Liga match in the United States. Relevent had attempted to hold a match between Barcelona and Girona at Miami's Hard Rock Stadium during the 2018-19 season. The following season, Relevent tried to hold a match involving Atletico Madrid and Villarreal in the same venue. Both times the effort was rebuffed by the U.S. Soccer Federation, who refused to provide the required approval for the event. The Royal Spanish Football Federation was also opposed to the effort.

During this time, Relevent filed an anti-trust lawsuit against the USSF. The suit, filed in U.S. District Court for the Southern District of New York, alleges that the USSF conspired with FIFA and Soccer United Marketing, the commercial arm of Major League Soccer, to prevent matches from foreign leagues from being held in the U.S. Both FIFA and SUM are named as non-party co-conspirators in the court filing. SUM is a competitor of Relevent in the market for promoting international soccer matches in the U.S.

"This is a step back in promoting football worldwide," La Liga president Javier Tebas said via email about the committee's recommendation. "Fans from all over the world deserve to be able to enjoy the leagues they love wherever they are. Leagues should have the freedom to bring their matches closer to their fans, just as the big American leagues have done for many years, led by [MLS commissioner] Don Garber himself in the case of the NFL. We believe this is our right and we will continue to fight for it."

A Relevent spokesperson declined to comment on FIFA's statement, citing the ongoing litigation against the USSF.

On Wednesday, Garber, who has a seat on the stakeholders committee, told ESPN that he was opposed to the idea of leagues holding official matches in other countries.

"I don't think it's the best thing for the sport," Garber said. "I think regular season games should be played in home markets, and that's been supported by even in the one issue we have going on now in Spain. The Spanish Federation doesn't think it makes sense."

He added: "This isn't really about what I think is good for our market. Because again, I have no role in that. I'm not trying to be cute. It's whether I think that a fan in a local city should lose a home regular season game. When you're only playing X number of them, it is not, in my view, in the best interest of the respective leagues."