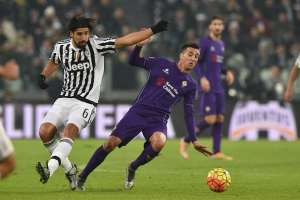 Juventus beat Fiorentina 2-1 at the Stadio Artemio Franchi on Sunday night in Serie A.

Despite the Viola dominating the first half, it was the Bianconeri who took the lead through Mario Mandzukic in the 39th minute.

The second-half exploded into life when Nikola Kalinic equalised in the 81st minute, only for Alvaro Morata to put Juventus back in the lead two minutes later. In the 89th minute Kalinic had a penalty saved by Gianluigi Buffon after he was fouled by Juan Cuadrado.

After a slow start to the match, it was the Viola who created the game’s first meaningful chance.

On the counter-attack Josip Ilicic found Nikola Kalinic, with the Croatian slipping in Federico Bernardeschi, whose deflected cross almost wrong-footed Buffon, but the veteran goalkeeper just managed to divert it wide with his right foot.

Yet, despite Fiorentina’s positive start, Juventus took the lead. Sami Khedira drove forward and lifted the ball into the penalty area, accurately onto the head of Paul Pogba. The Frenchman unselfishly headed the ball down to Mandzukic who expertly volleyed the ball past Ciprian Tatarusanu.

Just before half time Marcos Alonso put a header wide in the six-yard box following a fierce corner.

After the interval it was the Viola who created the first decent chance once again when Kalinic drove into the penalty area but his effort was saved by the feet of Buffon at the near post.

Eventually Fiorentina’s pressure broke through. Bonucci was pressured into giving the ball away by Borja Valero and Zarate with the ball falling to Kalinic, who produced a wonderful curling finish to get the Viola level.

Yet almost instantly the Bianconeri led again. Mandzukic touched a deep corner back to Patrice Evra whose powerful shot was blocked on the line by Badelj, but only into the path of Morata who tapped home.

However, two minutes before full-time Kalinic was awarded a penalty after being pulled down by Cuadrado. But Buffon produced a magnificent double save to deny the Viola.

In stoppage time Kalinic hit the bar from a yard out following a flicked on corner.

The result leaves Juventus in first place, whilst Fiorentina stay fifth in the table.