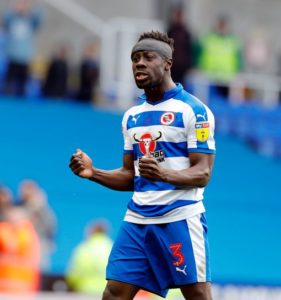 Reading FC defender Andy Yiadom is relishing a stern encounter against Leeds United in the English Championship on Saturday.

The Royals will be looking to move up the ladder when they travel to Elland Road to enrage second place team Leeds United in week 34 of the league.

Yiadom — who returned from a long injury layoff to help the side to a 3-0 win against Sheffield Wednesday last week — insists though it will be a difficult test, it’s not different to any other game in terms of preparation.

“I’m looking forward to going to Leeds and hopefully we can get something.”

“It doesn’t matter who we play, we want to put in the same energy in any game we play.”

“I’m feeling strong and fit now. We want to get a good feel around the club.”

”I don’t think the atmosphere is lacking at the Madejski.”

“We all appreciate the support.”

“It’s no different to any other game in terms of preparation.”

“I’m excited to get a run together and see how many points we can get between now and the end of the season.”

“We want to kick on and try and win as many games as possible.”

“It’s a big game on Saturday.”

“They’re a good team and we’re looking forward to going there and trying to put on a performance.”