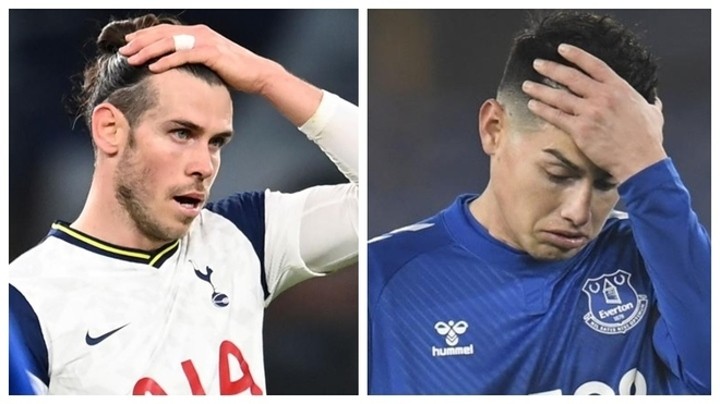 Gareth Bale and James Rodriguez ended their respective Real Madrid nightmares in the summer, making their much desired moves to the Premier League.

The Welshman moved back to his beloved Spurs on loan while the Colombian secured a transfer to Everton where he was reunited with former Los Blancos and Bayern Munich coach Carlo Ancelotti.

Yet the pair have experienced contrasting fortunes. Here are the five major differences between Bale and James this campaign.

1. Ancelotti defends James while Mourinho is tired of Bale

While Ancelotti has defended James through thick and thin this season, Mourinho has already shown that he is beginning to get tired of Bale's attitude. In a recent training video released by Spurs, the Portuguese coach is heard yelling at the Welshman, asking him if he wanted to return to Madrid where he would not play.

2. James has starred, while Bale has yet to appear

Despite some ups and downs, the Colombian has been key for Everton so far this season. Bale, on the other hand, has only played regularly in the Europa League against teams of a far lower level than the Premier League. Domestically, the winger has frequently been left on the bench.

3. A regular starter and a luxury substitute

Whenever fit, James is usually the first name on the team sheet for Everton, playing 12 games and scoring three goals as well as providing three assists.

Bale has started just once in the Premier League, and featured just four times in total, scoring one goal - a winner in a 2-1 home victory over Brighton.

4. James is a fans' favourite while Bale has been a disappointment

The arrival of such a big name at Goodison Park instantly filled Everton supporters with joy, and that has been coupled with fine performances that have made him an instant fans' favourite.

Bale, although adored by the Spurs fans from his first spell with the club, does not have the same impact this time around, with most Tottenham supporters not particularly bothered if he does not start given his lack of consistency.

5. Everton believe in James while Spurs are doubting Bale

After just six months at the club, Everton are already contemplating a new deal for the Colombian due to his performances and his marketability.

In Bale's case, where he is on loan until the end of the season, Spurs are now considering whether they will even sign him on a permanent deal this summer.