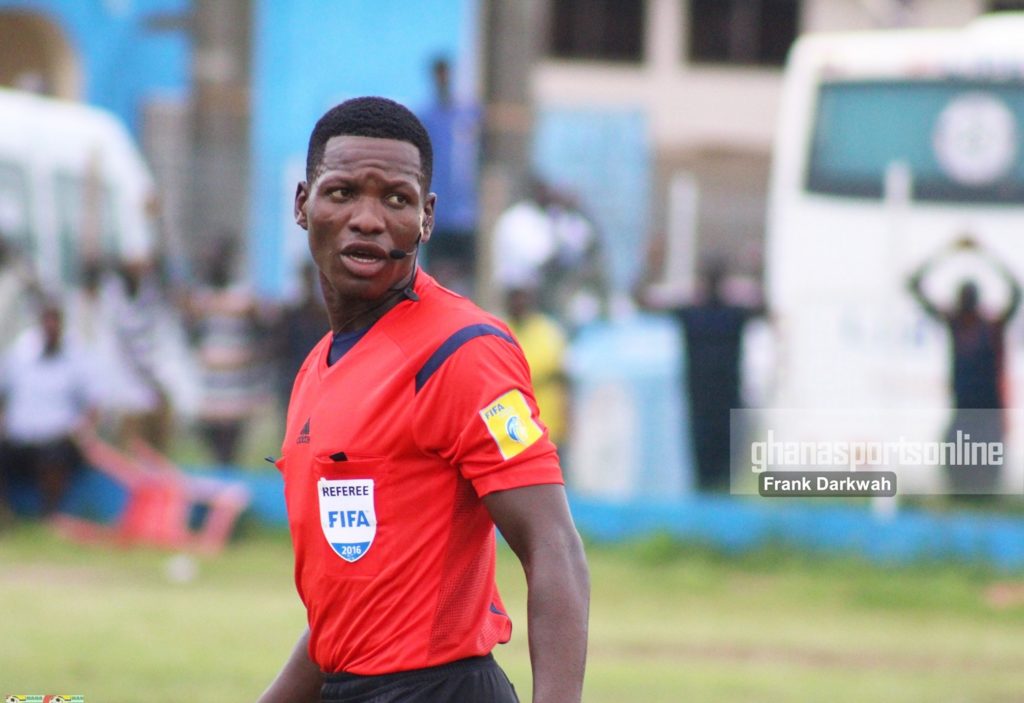 The Match Review Panel of the Ghana Football Association has announced decisions on some complaints received from some Premier League clubs in the on-going league competition.

Below are the decisions of the Review panel on the respective complaints:

Per the video watched, the Panel observed that in the 33rd minute complaint, the player No. 3 of Dreams FC did not handle the ball as claimed by the referee because the player did not jump and his hands remained on his body.

The 65th minute complaint, the Panel observed per the video watched that there was contact between the attacker No. 11 of Gt. Olympics and the defender of Dreams FC No. 20 which was careless.

The referee was given the opportunity to defend his decisions and he insisted that player No. 3 of Dreams FC jumped which the video did not support that.

The referee (Awurisa Andrews) is therefore suspended for four (4) match days from the date of receiving the information.

Assistant referee (Halilu Alhassan) is also cautioned to always be on top of the laws of the game.

Per the video watched, it showed a clear contact between player No. 15 of RTU who fouled player No. 25 of Asante Kotoko, but the referee ignored it in the 28th minute of the game. The referee therefore erred in his decision.

In the 46th minute incident, the video showed that there was a reckless contact between the goalkeeper and the attacker even though the attacker jumped. It also showed that a foul had been committed and the resultant should be a penalty and yellow card. The referee however awarded the penalty alright but failed to caution the player.

The referee admitted faults he had committed during the match when videos were sent to him for study and response.

Clement Kwame Nkuah committed multiple errors in his game and his actions changed the outcome of the game. He is therefore suspended for six (6) match days effective from date of communication.

Per the video watched, the goal scored by Medeama player Kwasi Donsu in the 89th minute was a good goal. There was absolutely no infringement whatsoever before the goal was scored. It was therefore strange that, Referee Musah Mubarik Paradavoa disallowed such a goal at that crucial moment.

It was also observed that his total output in the game was abysmal.

Referee Musah Mubarik Paradavoa when contacted via a call, tried to justify his decision for not accepting the goal, but he only talked about the incident he could later not justify when he saw the video which was sent to him.

The referee Musah Mubarik Paradavoa performance in the match day was bad and his decision changed the outcome of the game.

He is suspended for eight (8) match days starting from the day of notification.

Per the video watched the Panel observed that Asante Kotoko player No. 9 who was flagged offside was really not in an offside position at the time of kick of the ball. The Assistant 2 Referee, Roland Addy’s positioning was problematic which made him take a wrong decision in ruling the player offside. Both the referee and the assistant erred in the 11th minute decision.

The 31st minute decision by the referee not to admit a foul was a very tight decision because the video did not show clearly foul committed. The referee is therefore given the benefit of doubt.

The 37th minute reversal of a penalty that was taken against King Faisal and in favour of Asante Kotoko was a very vital decision because even if the player handled the ball, the ball came from his own teammate and therefore the defender cannot be penalized for handball. The referee took the right decision in this respect.

The 45th minute complaint of a King Faisal player wearing a pant numbering 20 and the top jersey numbering 26 even though clear in the video watched did not disqualify the player because that No. 20 was the player CMS Registered number. There was however an attempt by team officials to reconcile the two numbers to be No. 20.

As regard the complaint of eight persons on the technical bench of King Faisal, the Panel did not have the benefit of the video showing any technical bench and the number on it.

In a long and detailed discussion with the referees (Center, Assist One and 4th) all attempted to explain their point of views on the match.

The Panel came to the following conclusion:

The Referee Julian Nunoo is therefore given a four (4) match day ban effective the date of communication for the clear error committed in the 11th minute of the game.

Team officials are advised to ensure the right numbers are embossed on the player’s jerseys properly.

Match Officials should also be vigilant during inspections to avoid these unacceptable mistakes in future.

Per the video watched closely, it shows that the fast ball hit the body of the player before the hand in a quick movement.

Per the laws regarding hand ball, the player cannot be charged with a handball offence since the ball came off the body before touching the hand.

The referee, Richmond Antwi and his Assistant 2, Kenneth Armoo are commended for the right decision taken in the game.

Per the video watched, the Panel observed that RTU player No. 15 headed the ball and it touched the hand of the Medeama player No. 27 while on his way down after a jump to challenge for the ball. The position of the hand of Medeama player was as a consequence of his body movement and therefore cannot be considered as a hand ball.

For the referee’s decision not to award a penalty was clearly on his good interpretation and understanding of hand ball situations. The referee is therefore commended for a good decision.

The Panel observed that the attacker No. 27 of Bibiani Goldstars was put on side by player No. 14 of Bechem United who was found at the far-right side of the field. Therefore, there was no offside offence. The foul was justified and the red card on player No. 5 was also a good decision.

The 90th minute incident was a penalty and yellow card which the referee denied Bechem United. The referee (Joshua Samadji) and his Assistant 2 (Avinou Prosper) both erred.

Referee Joshua Samadji after watching the video sent to him agreed that he was far from the action spot in the game and could not see clearly. He could clearly now see in the video that there was contact between the attacker No. 20 of Bechem and the goalkeeper of Bibiani Goldstars No. 22 which was clear foul on the player.

Referee Joshua Samadji and his Assistant 2 Prosper Avinou are therefore suspended for six (6) match days each effective from the date of communication since their error changed the outcome of the game.