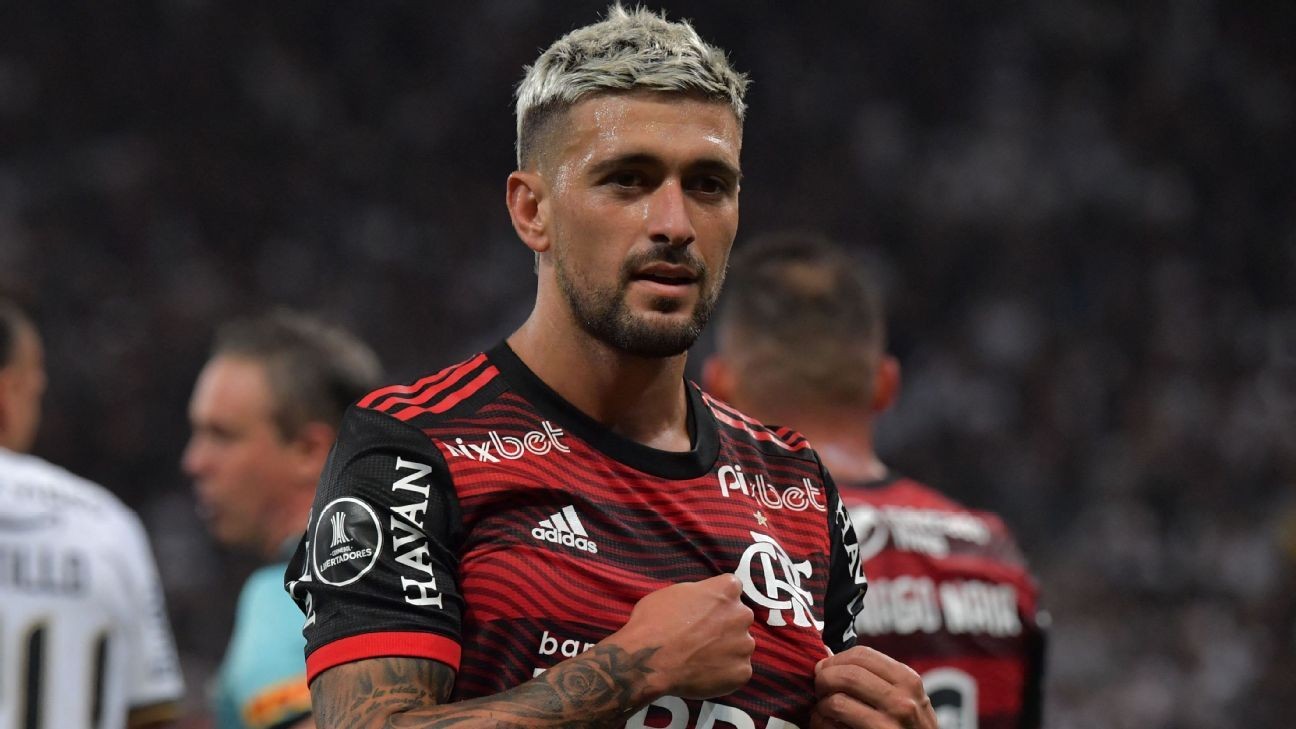 Giorgian De Arrascaeta has put Flamengo on the cusp of a Copa Libertadores semifinal berth. NELSON ALMEIDA/AFP via Getty Images

Over the last few years a cluster of Brazilian super-clubs have exerted a stranglehold on the Copa Libertadores, South America's Champions League, and there seems little chance of the grip being relaxed in 2022.

There is more money in the Brazilian game and, with European clubs now more interested in teenage promises than in players in their mid-20s, a handful of clubs in Brazil have been able to assemble and retain top quality squads and then dominate the Libertadores year after year.

Champions in 2019 and beaten finalists last year, Flamengo of Rio are very close to making the last four of this year's competition after last week's first leg of the quarterfinal, when they won 2-0 away to Corinthians of Sao Paulo.

Corinthians have been grinding out results all year -- they have scored just five goals in the nine matches they have played in the competition. They were the better side for the first half hour, but the game effectively ended as a contest when Giorgian De Arrascaeta curled home a wonderful opening goal. Once Flamengo were ahead the result was never in doubt. They could defend deep and set free their formidable collection of attacking talent. In the end Corinthians were fortunate to get away with a 2-0 defeat, and something will have to go badly wrong for Flamengo in front of their own fans on Tuesday night if their semifinal place is to slip away.

Champions in both of the last two years, Palmeiras seemed in danger of losing their crown in the first leg of their quarterfinal, away to domestic double winners Atletico Mineiro. Soon after half-time Palmeiras were two goals down and rocking. A huge crowd in the Mineirao stadium were in fine voice and fully confident that last year's defeat in the semifinals was about to be avenged. But at the final whistle they filed away much quieter, their euphoria punctured by a Palmeiras fight-back.

Portuguese coach Abel Ferreira is making a name for himself at Palmeiras with some excellent work. He has been splendid at developing players, and also at cultivating a team with both spirit and a tactical plan. Two well-struck set pieces from the left foot of Gustavo Scarpa set up goals that brought the score back to 2-2, preserving Palmeiras' long unbeaten away record in the Libertadores and making them narrow favourites to reach the semis. Last year they eliminated Atletico on away goals and after scoring twice in Belo Horizonte they probably regret the fact that the rule is no longer in effect. But Abel's Palmeiras consistently seem to find a way to win, and it would now be something of a surprise if Atletico can get past them.

While Atletico and Palmeiras were doing battle, a similarly pulsating game was taking place between two teams from Argentina. The young Velez Sarsfield side seemed to have established control when they went two goals up, but Talleres, under Portuguese coach Pedro Caixinha, tweaked their formation and hit back to draw level, before Velez scored a late winner to take a narrow lead north to Cordoba for Wednesday's return game. The sobering thought for whoever emerges victorious is that it is almost certainly Flamengo who will await in the semifinals.

It could be that the strongest challenge from Argentina will come from Estudiantes. But first they will have to get past determined and competent opponents in Athletico Paranaense. Unlike the other four Brazilian clubs still in the competition, Athletico have never won the Libertadores. But they are reigning champions of the Copa Sudamericana, the Europa League equivalent, and are a forward thinking ambitious outfit with dreams of winning the Club World Cup. They have also made serious investments in this year's quest for glory. It speaks volumes that their main reinforcement, Fernandinho, has come in from Manchester City, while Estudiantes have brought in striker Mauro Mendez from Montevideo Wanderers.

But Athletico were unable to make home advantage count in Thursday's goalless first leg. This does, though, leave the second leg fascinatingly poised. On the one hand, Estudiantes are very strong at home, and carry a threat both from set pieces and open play. On the other, Luiz Felipe Scolari's Athletico are happiest on the counter-attack. They lacked space to launch their transitions at home, and might find playing away more to their liking. But the stakes are high in this match, which will bring the quarterfinals to a close. Estudiantes versus Athletico will determine whether the last four is a case of two each for Argentina and Brazil, of three to one in Brazil's favour.

Brazilian domination of the Sudamericana also looks likely. There is the certainty of one semifinalist from Brazil -- Sao Paulo hold a 1-0 lead over Ceara after the first leg. And there is also a good chance of two more. Atletico Goianiense frustrated the debut of Luis Suarez in his second spell with Nacional, and came back from Uruguay with a 1-0 win. It was a backs to the wall affair, featuring some fine Brazilian goalkeeping -- and the same applies to Internacional's 0-0 draw away to Melgar of Peru. Both Brazilian sides are favourites in front of their own fans. The future opposition is likely to come from Independiente del Valle of Ecuador, who won their first leg 1-0 away to Deportivo Tachira of Venezuela, and who now count on the altitude of Quito to help the ram home their advantage.