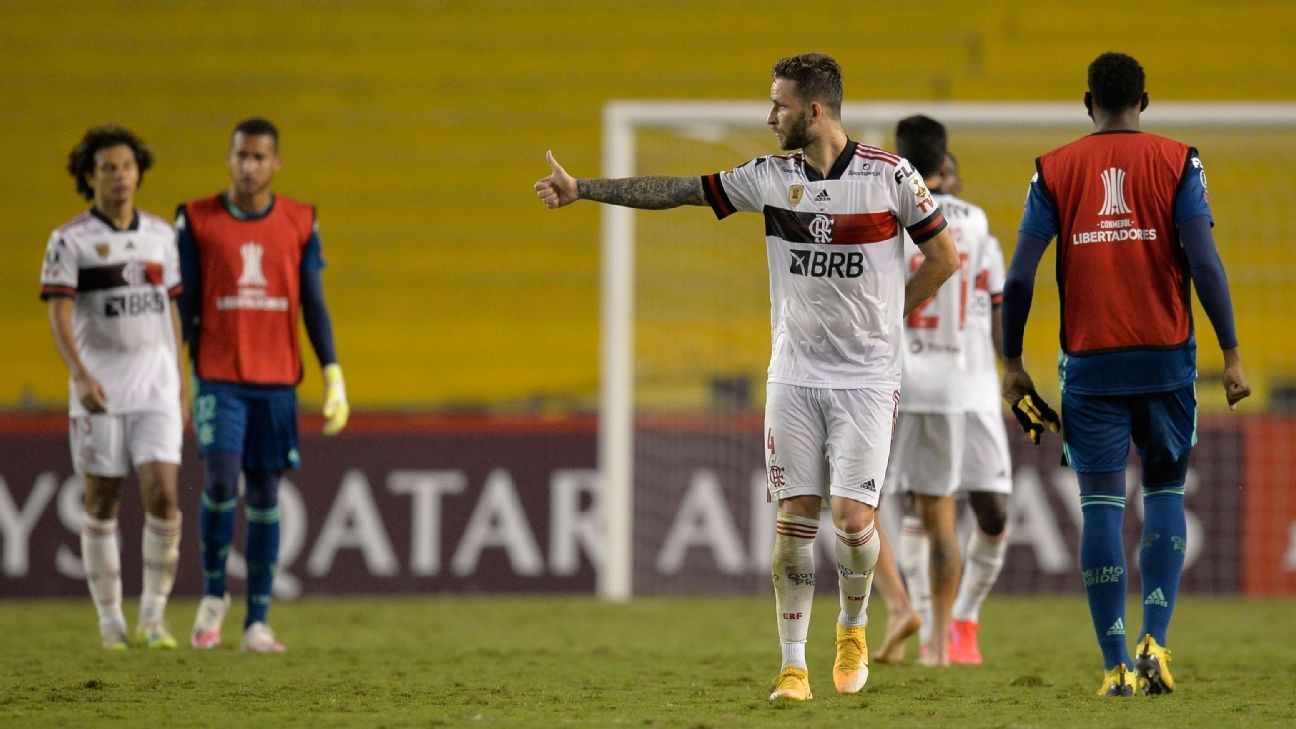 Last Thursday his side was humbled 5-0 away to Independiente del Valle of Ecuador. Social media was rife with calls for Torrent to be sacked. But on Tuesday, still in Ecuador, Flamengo held on for a deserved 2-1 win against Barcelona of Guayaquil. After the altitude of Quito in last week`s match, it was surely a relief for the team to come down to sea level for this game. Even so, they had to win it the hard way.

Flamengo's training session was cancelled when a local volcano threatened to erupt. Star striker Gabriel "Gabigol" Barbosa went down with an injury, and they were already missing first-choice keeper Diego Alves, a victim of the coronavirus. He was not the only one. While in Ecuador another seven players tested positive, in addition to two members of the coaching staff. Those ruled out of action included the only two right-backs who had made the trip. And so, to complete their squad, Flamengo hurriedly tried to fly another four players up to Ecuador.

This, though, ran into problems. Without authorisation to enter Peruvian air space, the plane was forced back to Brazil, and the reinforcements had to wait while the bureaucracy was sorted out. In the end they made it to Guayaquil in time, but their arduous journey was nearly in vain.

The Guayaquil area has suffered greatly from the coronavirus outbreak. But with the situation brought under some sort of control, the local health authorities were understandably spooked by the presence of a virus-hit football delegation in their midst. They did not want the game to go ahead, and got in touch with CONMEBOL, the continental football federation, to request a suspension. When this was not forthcoming, they announced the suspension of the stadium in which the game was to take place. With just a few hours to go until kick off, it appeared that Barcelona vs. Flamengo would not go ahead.

But then the backstage political levers began to be pulled. CONMEBOL are very keen for the show to go on. The Libertadores returned last week after a six month shut down that has had a severe effect on South American football finances. Squads in the competition have been increased from 30 to 50 precisely to cover a state of affairs where teams lose a number of players to the virus. The end result was this; if the local health authorities thought that the game should not go ahead, Ecuador`s national health authorities disagreed. And so the cancellation of the game was cancelled. The match could go ahead as planned, with the Flamengo delegation going straight from the stadium to the airport afterwards, without going back to the hotel.

This is a tale that shows the desperation of the football authorities to ensure that matches can be played, and the influence they can wield over the political authorities. And so the Copa Libertadores goes on. But will the same thing happen to South America`s World Cup qualifiers, due to get underway in a couple of weeks?

After being forced to cancel the FIFA dates of March and September, CONMEBOL were very keen to preserve the October fixtures. Further north, the CONCACAF region felt compelled by the coronavirus situation to put World Cup qualifying back to March of next year. South America, which is also struggling to deal with the pandemic, does not want to do likewise. Its marathon qualification format, where all 10 countries play each other home and away, needs 18 dates. Unless it starts soon, a change of format will be needed -- and as everyone bar Uruguay have already sold the TV rights on the basis that there will be nine home matches, this is to be avoided.

Last week FIFA president Gianni Infantino was enlisted as an ally, making sure that countries around the world waive quarantine restrictions on the South American players when they return from international duty. But the clubs, especially in Europe, will have followed the events in Guayaquil and are entitled to be concerned. From a logistical point of view, the World Cup qualifiers present much more of a challenge than the Copa Libertadores. With the club competition, the players can be kept under rigorous health protocols from the start of the journey to the end -- and even then players, coaches and referees in South America are testing positive.

For the qualifiers the players must first be assembled from all over the world, increasing the risk of contamination. And, as events in Guayaquil have made very clear, there is a "the show must go on" mentality -- which will surely make some clubs fear that their players might be at risk while on international duty.

Will any of the clubs defy Infantino and refuse to release their players? The answer will be revealed in under two weeks.