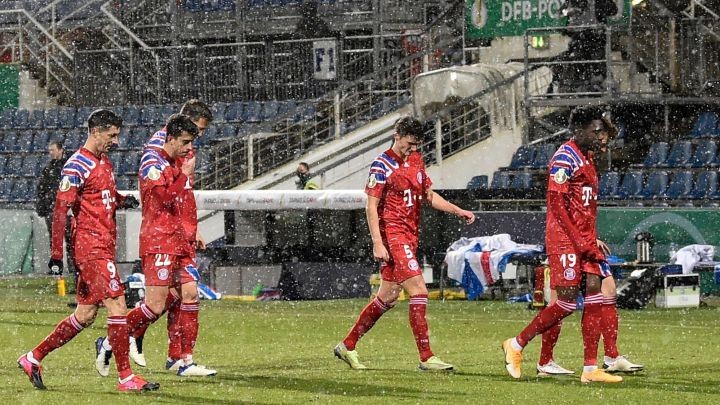 DFB-Pokal holders Bayern sensationally crashed out in the second round on Wednesday, stunned 6-5 on penalties following a 2-2 draw against second-tier Kiel after extra time.

A 95th-minute equaliser thwarted Bayern, who were on the brink of the last 16 thanks to Leroy Sane's sublime free-kick at Holstein-Stadion, where Serge Gnabry's opener had been cancelled out by Fin Bartels.

After Bayern substitute Marc Roca was denied by Ioannis Gelios, Bartels stepped up to complete the remarkable upset – the Bundesliga and Champions League holders beaten in a penalty shoot-out against a lower-tier side in the DFB-Pokal for only the second time after 2000.

"It's a shock of course. We're very disappointed, we wanted to defend the treble. Taken altogether it was down to details, the team showed great spirit," Flick said.

"We were dominant, which was our aim. It's very annoying that we conceded the equaliser in the last second. We must congratulate Kiel, they made it a real cup fight, they were completely committed. We must put it behind us and improve.

"We must be more compact at the back. We must apply more pressure and be more solid when it comes to balls over the top.

"It's surprising, that's what the cup is like. Kiel defended well, their keeper turned in an outstanding performance. It just happens in penalty shoot-outs, I don't blame Roca."

For the first time in more than 12 years, Bayern were forced into extra time against a lower-tier team in the DFB-Pokal after Kiel captain Hauke Wahl struck at the death.

Bayern star Thomas Muller added: "At the end of the day we lost against the underdogs from Kiel. It may sound silly after such a defeat but lady luck wasn't really on our side today.

"We had a pretty good feeling in the first half and played decently. We had good chances, we combined well, we enjoyed more of the ball. Kiel gave it their all. It was certainly a good performance from their point of view.

"It wasn't an upset that was looming from the off. We made mistakes when it came to the details and Kiel were pretty clinical, as they were in the shoot-out."