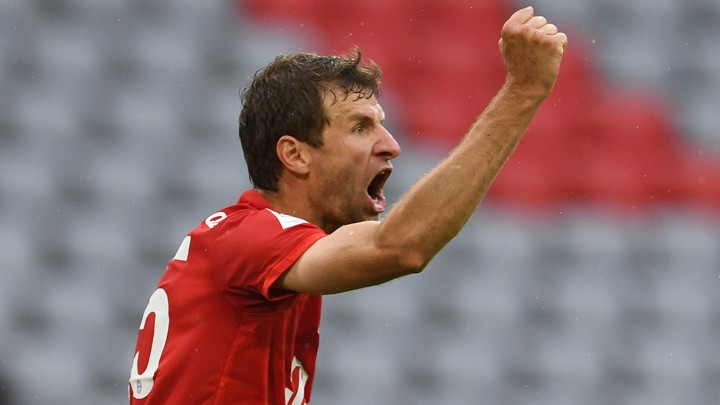 Usually a left-back, Alaba continues to impress in the centre of defence for Bayern, who are four points clear at the top of the league table.

While Martin Hinteregger's double brought Eintracht back from 3-0 to 3-2 early in the second half, Bayern claimed an eighth consecutive win in all competitions.

Flick was satisfied with Bayern's display, but he had special praise for Alaba and goalscorer Muller.

"I was very satisfied with the first half. We were very concentrated. We made a lot of chances to score," he told a news conference.

"Unfortunately, we did not score enough goals. You just have to say that. There could have been even more goals. We also didn't allow our opponents any chances.

"You can also highlight two players. One is Thomas Muller, who plays very intelligently and occupies the space well. But then, of course, there's the head of defence, David Alaba, especially in the first half he played outstandingly. I'd just like to say that here.

"In the second half we let the opponent come back. There we were careless in the five, 10 minutes...we must defend better and more consistently. We knew that this is a great strength of Frankfurt. We allowed them to score two goals, unfortunately.

"But the reaction afterwards was good and I liked it. Then we tried to score again. And then we could decide the game with the fourth and fifth goals."

Leon Goretzka, Muller, Robert Lewandowski and Alphonso Davies were also on the score sheet for Bayern to go with a Hinteregger own goal.

Bayern are next in action in Der Klassiker, facing Borussia Dortmund in a top-of-the-table clash on Tuesday.

Dortmund ensured they remain within four points of their fierce rivals after beating Wolfsburg 2-0 on Saturday.

Goals from Raphael Guerreiro and Achraf Hakimi wrapped up the win for Dortmund, who have now won six straight games in the Bundesliga to keep their title hopes alive.

Since returning to action following the coronavirus pandemic, Lucien Favre's have scored six goals without conceding.