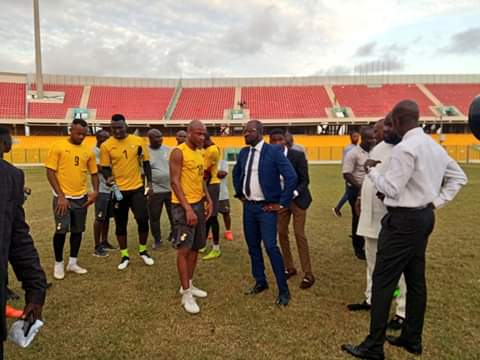 Kurt Okraku is enjoying a remarkable start to his tenure as President of the Football Association after the Black Stars and the Black Meteors recorded important victories on Thursday.

The Black Meteors defeated Mali to keep alive their hopes of qualifying for the Tokyo 2020 Olympics after reaching the semi finals of the CAF U-23 Cup of Nations.

The Black Stars also recorded an impressive 2-0 win against South Africa to begin their 2021 Nations Cup qualifiers on a bright note.

Okraku, who was elected President of the FA just three weeks ago has initiated a campaign to reignite the passion of Ghanaians for the national teams, which seems to be working after thousands thronged to the stadium to watch the Black Stars in Cape Coast.

Even though, the ex-Dreams FC executive chairman is yet to swing into full gears with regards to the main job at hand.

The affable football administrator has laid down his plans of returning the most loved game in the country to its very peak.

The Black Meteors are yet to find out their opponents for the semi finals of the CAF U-23 Cup of Nations and victory will confirm their place at the Olympic games in Tokyo next year.

The Black Stars will leave Ghana for Sao Tome for their group C second game in the qualifiers.