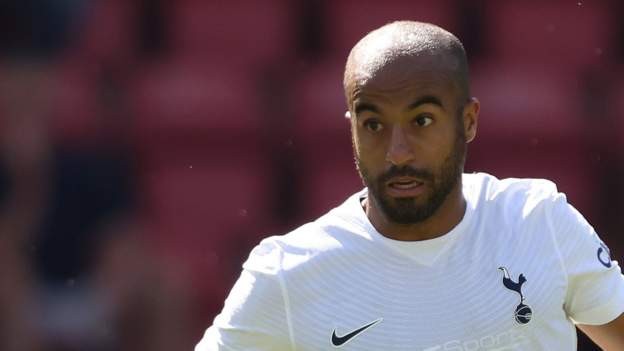 Lucas Moura has been with Tottenham since January 2018

Brazilian Moura has been stuck in England, more than 5,000 miles away from his home and family, during the worst of the pandemic.

He feels mental health is a subject that needs to be discussed more widely and sympathetically.

Speaking to BBC Sport, Moura said: "The pandemic was tough for everyone.

"Everyone has learned something from this situation. Now we need to change our minds about life and health and do the best we can to help people to stay safe."

Why 'superhuman' Biles could change attitudes to mental health in sport

Moura was speaking before the Mind Series of pre-season games involving Tottenham, Chelsea and Arsenal that runs for a week from 1 August.

The series is intended to raise money for Mind, the mental health charity, and the respective clubs' foundations.

Moura knows mental health issues can arise from the pressure on elite sportspeople at major events - and also the abuse that can be directed at them on social media.

England trio Marcus Rashford, Jadon Sancho and Bukayo Saka were all targeted after they were unsuccessful with penalties as England lost the Euro 2020 final to Italy in a shootout on 11 July.

Moura feels everyone needs to work harder to stamp out social media abuse but thinks the platforms themselves have a major role to play.

"We need to stop it. We need to teach our kids to do good things. It is difficult. Fans can interact with players on social media. But some fans do bad things. You just hope the organisations do something about it."

Both Facebook, which owns Instagram, and Twitter put out statements after the Euro 2020 final saying that they had removed abusive posts directed at Rashford, Sancho and Saka.

Twitter said it had also suspended a number of accounts for violating its rules, while Facebook said it had recently announced tougher measures on its Instagram platform, including permanently deleting accounts that repeatedly send abusive direct messages.

In April, Instagram announced a tool to enable users to automatically filter out abusive messages from those they do not follow.

On the pitch, Tottenham are looking for improvement after a testing few months.

The cluib had five-and-a-half years of stability under Mauricio Pochettino, but former Wolves manager Nuno Espirito Santo is now their third manager in less than 20 months.

His appointment on 30 June ended a 10-week search for Jose Mourinho's replacement.

Two long-serving players have already left, in Erik Lamela and Toby Alderweireld, while speculation persists around striker Harry Kane and a move to Manchester City.

On the plus side, Son Heung-min has signed a new contract to 2025, whilst Spain international Bryan Gil and Italian goalkeeper Pierluigi Gollini have brought a freshness to the Tottenham squad.

"Every player that comes to the club has the quality to help the team," said Moura. "We also lose some important players but football is like this. Players leave, players come."

As he has given himself the target of ending his three-year international exile by returning to the Brazil squad for the 2022 World Cup, Lucas has welcomed Nuno's arrival.

"He is a very clever manager," he said. "He did well at Wolves and can do well here. Everyone has a different style. Mourinho is quite different. Nuno is more quiet."

Tottenham visit Chelsea on 4 August, before finishing off their pre-season programme with a home game against Arsenal on 8 August.