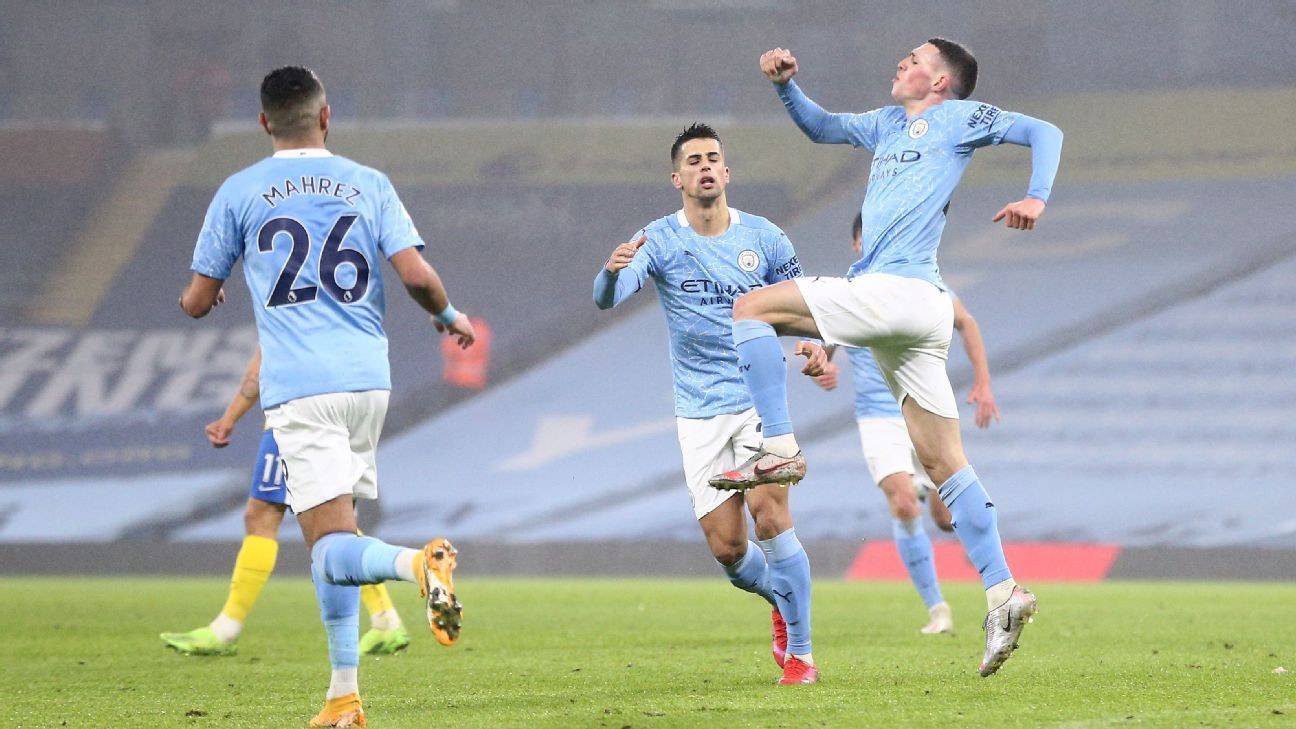 MANCHESTER, England -- While the fall-out from Manchester United's top-of-the-table clash with Liverpool is being pored over on Sunday evening, Manchester City will quietly kick-off against Crystal Palace.

The debate at Anfield will focus on how the result -- whatever it is -- has shaped a title race between English football's two most successful clubs. But just an hour down the road, City will be hiding in plain sight under the lights at the Etihad looking to continue their steady march up the table.

On a wet Wednesday night in Manchester, Phil Foden scored his eighth goal of the season to earn City a 1-0 victory over Brighton. It's now seven wins in a row over all competitions -- unbeaten in 14 -- and ahead of the weekend, which will be consumed by talk of a first title showdown between United and Liverpool since 2008-09, Pep Guardiola's side are into the top four.

After a difficult start to the season, City are just four points behind leaders United with a game in hand. Maybe it hasn't been such a difficult start after all. The relentless consistency that was the foundation for titles wins in 2018 and 2019 is slowly returning.

Liverpool vs. United title race is box office but Man City are team to watchGuardiola tells Man City players to stop runningPep: Cancelo was 'confused' in first season at City

For the first time this season, City have won four successive league games. They didn't manage that feat at all last season until Liverpool had been officially crowned champions and this run of form is much better timed. Of their next five league games, only one (Aston Villa at the Etihad on Jan. 20) is against a team in the top half of the table. Of the other four, three (West Brom, Sheffield United and Burnley) are against teams currently in the bottom five. The big clubs have learned already this season that nothing can be taken for granted, but if ever there was an opportunity to put together a title charge, it is now.

"My first thought is Palace, not the table," said Guardiola afterwards. "We knew how tough it would be. Brighton had a good mentality to play.

"We had a really good first half and had chances. After we missed a really clear chance in the second half they were better.

"We need to win these sort of games. It is a good lesson for us. Every game will be like this."

Phil Foden has become an integral figure for Manchester City, who quietly are right in the thick of the title race again. Getty Images

City's form is even more impressive given it's been achieved in the midst of a COVID-19 outbreak at the club that temporarily closed their training ground and without a recognised striker. Sergio Aguero and Gabriel Jesus have scored just two league goals between them this season but in their absence, Foden, in particular, has started to produce the numbers his talent has always suggested he is capable of.

"I said about Phil many times -- look at his age, the number of goals, games and number of kilometres he runs for the team," said Guardiola.

"He's got a special instinct in front of goal, with his left and right foot. He deserves to play. He leads his life 24 hours to play football.

"There are a lot of distractions around our lives but you see his behaviour and he's happy when he's training and playing. You can see in his performance."

Enjoying a more prominent role following the departure of David Silva, the 20-year-old has equalled his career-high in goals (eight) before the season has reached its halfway point. His goal here after 44 minutes included a sublime touch to duck inside Adam Webster before sneaking his shot inside the post from the edge of the box with his weaker right foot.

It needed to be good to beat Robert Sanchez, who made five saves, including fine stops on Riyad Mahrez and Kevin De Bruyne in the second half, and it was. The result would have been more comfortable had Bernardo Silva not hit the post and substitute Raheem Sterling not seen a stoppage-time penalty fly over the crossbar. Instead, Foden's fourth goal in his last six games was enough to have substitutes Kyle Walker and Benjamin Mendy jumping about in the stands on the final whistle.

Walker nearly lost his voice towards the end as he screamed at the City defence to "block" and "clear" as Brighton pushed forward but he needn't have worried. Ruben Dias has made Guardiola's backline more durable than it was last season and he is forming a partnership with John Stones that is becoming very hard to break.

City have conceded only three goals in the 14 games since the 2-0 defeat to Tottenham in November and have the tightest defence in the league having shipped 13 goals in 16 games. Five of those were against Leicester in September -- three days before Dias arrived from Benfica.

"It's another clean sheet," said Guardiola. "In the box we are solid. The numbers are good apart from Leicester in the beginning. It means a lot for us."