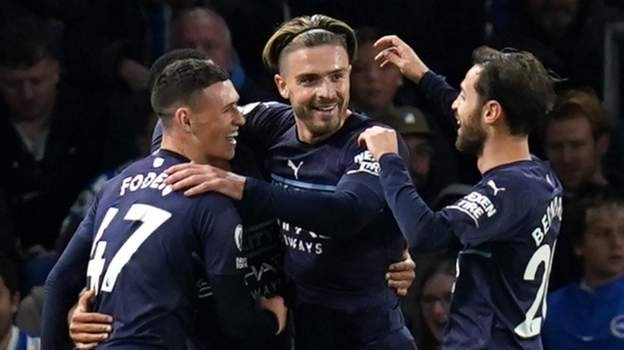 Phil Foden scored twice as Manchester City produced a devastating first-half display to beat Brighton and move up to second in the Premier League.

Pep Guardiola's side scored three goals in the opening half hour as Brighton, who could have gone above City with a win, simply could not cope with the away side's sweeping attacks.

A brilliant hooked clearance off the line by Lewis Dunk from Gabriel Jesus' shot in the 10th minute was only a brief reprieve for the hosts as City took the lead three minutes later.

Seagulls goalkeeper Robert Sanchez dropped a routine save from a deflected shot at the feet of Bernardo Silva, who quickly found Ilkay Gundogan to score from close range.

The visitors made it 2-0 after a devastatingly quick break from a Brighton attack, charging up the pitch before Jack Grealish flicked the ball into Foden's path and the forward made no mistake for his third goal of the season.

Foden got his fourth of the campaign just moments later as Jesus' shot deflected off him after Sanchez could only stab away Grealish's low effort at the near post.

The England international almost got his hat-trick just before half time but Sanchez made a fine save to keep out a curling effort.

Brighton were better after the break and Ederson had to be alert to keep out decent efforts from Pascal Gross and Leandro Trossard.

Ederson was finally beaten in the closing stages when Enock Mwepu was brought down inside the box and Alexis Mac Allister just managed to get the ball past the City goalkeeper's dive.

Brighton came from two-goals down to beat Guardiola's side last season but there was to be no fightback this time as City wrapped up the win when an unmarked Riyad Mahrez rifled home in stoppage time as the visitors moved back to within two points of leaders Chelsea.

City started this season with a 1-0 defeat to Tottenham but if that produced any concerns about their ability to mount a strong title defence they have long since been eradicated.

They have not lost a Premier League game since and the last seven days have seen them at their attacking best, with 11 goals scored in their last three games and just two conceded.

Brighton had come into this game having conceded just two goals in open play in the Premier League after an excellent start to the season but City got three against them in just 31 minutes as the hosts punished almost every slight mistake the Seagulls made.

City had nine shots on target in the first half - the most by any side in the Premier League this season - and while they were far below that level after the break, the damage had already been done.

Brighton will take heart from a second-half performance that showed their early season form is not a blip, although City did come to life after Mac Allister's late goal.

City have now taken 20 points from the last 24 on offer in the Premier League and show no signs of slowing down in their pursuit of back-to-back league titles.

Attempt saved. João Cancelo (Manchester City) right footed shot from outside the box is saved in the centre of the goal. Assisted by Kevin De Bruyne.

Attempt blocked. Phil Foden (Manchester City) left footed shot from the left side of the box is blocked. Assisted by Kevin De Bruyne.

Attempt blocked. Phil Foden (Manchester City) left footed shot from the left side of the box is blocked. Assisted by Kevin De Bruyne.

Attempt saved. Phil Foden (Manchester City) left footed shot from the left side of the six yard box is saved in the bottom left corner. Assisted by Kevin De Bruyne.

Attempt missed. Tariq Lamptey (Brighton and Hove Albion) right footed shot from the right side of the box is close, but misses to the right.

Penalty conceded by Ederson (Manchester City) after a foul in the penalty area.