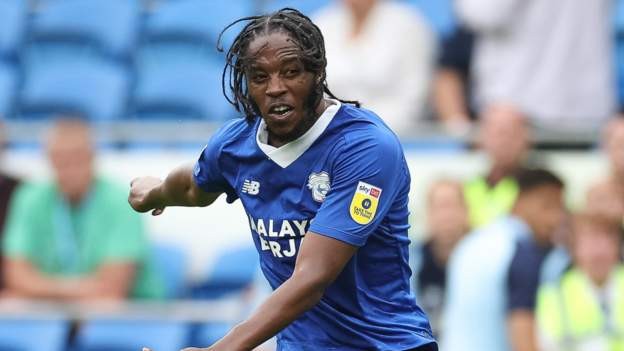 Romaine Sawyers has also played for Walsall and Brentford

The 30-year-old's key contribution made it a debut to remember following his departure from West Bromwich Albion in the summer.

The Saint Kitts and Nevis midfielder was replaced shortly after scoring, but his goal was enough to seal victory.

"He is an organiser when he is out there," said Morison.

"He might not like it, but he is a bit of a football geek, he knows his stuff and loves the intricacies of the game.

"He loves the game, he loves the tactical side of it and understands it really well."

Sawyers was Morison's 10th signing of the summer, and one of many debutants to impress against Norwich.

In a game of few chances, with just three shots on target between the two sides, Sawyers' strike proved crucial and delighted his manager.

"I showed him exactly what we wanted from him," Morison added.

"We brought him here because he can do things like that out of nothing, as soon as it left his foot it had a goal written all over it.

"It was great for him and everyone involved today."

Morison's new-look Cardiff side featured seven players who were making their competitive debut for the club.

Only Perry Ng - who was sent off in the contest - started last campaign's opener against Barnsley as well as against Norwich.

But the new group of Bluebirds have bonded quickly, and victory over a Canaries side who were relegated from the Premier League last season only adds to Cardiff's label of an unknown quantity this season.

"They had one shot today, we only had three, but we managed to score one. We had that one moment, they didn't.

"We have won one game, now we need to make sure we back it up with a performance next week [against Reading]."