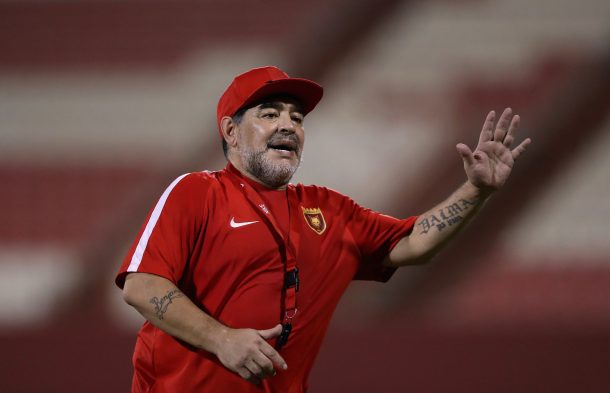 Argentine football legend Diego Armando Maradona is backing Egypt to qualify for the 2018 World Cup this weekend ahead of Ghana.

The former Napoli superstar says qualification for the World Cup in Russia will bring peace and stability to the north African country which has been unstable following the Arab Spring.

The government is Egypt is country on success in World Cup qualification as they are competing with Ghana, Uganda and Congo for the group's single slot for the tournament in Russia.

The Pharaohs currently sit first in Group E with nine points and are in prime position to qualify with two matches left against Congo at home and Ghana away.

A victory over Congo on Sunday in Alexandria will guarantee Egypt a place at the World Cup while Uganda must fall to Ghana on Saturday in Kampala to keep the Black Stars slim hopes alive.

Maradona is supporting the Egyptians to seal the victory over Congo and edge past Ghana for the place at the World Cup.

“I would like to greet Egyptian fans. I hope the Egyptian national team can qualify to the World Cup,” Maradona told ON Sport.

“I hope Egyptians can enjoy such a celebration in peace.”

Congo are at the bottom of Group E with just one point after four games, meaning they will not be able to qualify for the World Cup next year.

Ghana will be seeking to jump into second position with a win against Uganda in Kampala and hope for Egypt to drop points against Congo.

That result will push the qualifiers to the final round of matches to be played next month in Kumasi between Ghana and Egypt.